I was asked to forward the following post to this thread by reemo;

"Two things have I required of thee; deny me them not before I die:

Remove far from me vanity and lies: give me neither poverty nor riches; feed me with food convenient for me:

Lest I be full, and deny thee, and say, Who is the Lord? or lest I be poor, and steal, and take the name of my God in vain."

Sat across from an elderly man at his dinner table, the both of us prayed this prayer from the thirtieth chapter of the proverbs together before eating supper. It has been a very rare thing for me to eat two meals in a single day, and the man I was seated across had provided me with both at no expense or effort on my part.

It was a very cold Sunday evening. Snow fell quickly from the dark, cloudy skies. The forecast predicted a foot or two of snow overnight, a strange thing being that it was only the middle of October. The snow fell hard outside, where the cold wind was blowing harshly with no regard for any man or beast; however, inside this man's humble home the air was still and warm on account of the wood stove in the opposite corner of the room.

We listened to a German opera while we ate, a piece from his collection which I had picked with much excitement as I had not heard it in a very long time. The man opposite me is a polish immigrant that fled communism and established himself with a successful business insulating single pane windows on high-rises. We shared many stories and it was a very wonderful day, but above all I was surprised by how much I had in common with this man.

It was a simple meal: wiener schnitzel with rice. Being sensitive to salt he added none but dressed the rice with many pleasant herbs, so pleasant was it that I found no need to dress the meal with any additional table salt. Savoring every bite of such a rare home-cooked meal with the wonderful music in the small, warm home decorated with many pleasant paintings and antique furnishings and trim I remembered something that finally brought me peace after being vexed most of the year:

Contentment comes from taking time to stop and appreciate those simple things between the daily sufferings of life.

Having to realize this again seems stupid considering how often I've made this point in all my works, however it's a perfect example that you constantly need to examine yourself to avoid drifting from your ideals. I've spent so much time trying to abase and deny myself to remain humble that I began disregarding the gifts that the Lord has so graciously given me, to the point that in doing so I have charged Him falsely for imagined slights against me at times.

There are still twenty-four hours in a day. The seasons still come and go according to their appointed times. My strength remains and my appearance is goodly when I take care of myself. Our land is still as beautiful and bountiful as it has ever been, perhaps moreso this year than others for some crops.

Given all of these things I have however spent more time working away from the land by the need of money, both of necessity and of desire though ultimately not to the benefit of my soul. We built a barn this year among many other projects and my friend lost his job for a time which required me to cover his bills in the interim, so needless to say quite a sum was required to keep afloat. Further, we decided to be much stricter with preparing and planning for winter at the outset of the year since the last was so devastating that we swore an oath to do all we can to avoid such a thing again.

Despite working harder away from the land for pay, I did not adjust my expectations for work on the land. Every hour of every day was spent laboring and doing the works, and I did not rest on the sabbath day despite my conscience convicting me of it the whole summer. I slept very little and very poorly and I ate so little that I would be either faint or angry at all times, never being able to appreciate what few meals I did eat. I despised my labor and I hated all of my work, and I was greatly troubled by my position and doubting all of my choices and decisions through my whole life, eventually coming to hate myself at the end of it all.

At no point was I ever required to work on Sunday. At every point I had plenty of food to be cooked. If at any time I chose to be reasonable I could have rested on the sabbath and prepared myself delicious meals, but despairing and thoroughly hating myself I did not allow myself even that little reprieve being so madly delusional. Had I taken even a little time to rest and enjoy the summertime as I have done every other year I would likely have gotten more done this year, having a contented mind with strong conviction.

Things came to a head this fall when I received a call from the zoning office on a Monday regarding the need for an inspection of my friend's house while I was working three jobs, wrapping up the barn and other projects before winter, paying my friend's bills while he was finding another job, and trying to lay out a budget for hay, propane, wood, and vehicle repairs before winter. It was a five minute call and was civil, but I could feel my mind unraveling the entire time and I quickly lost my composure after it ended.

I considered fleeing into the national forest to the west after burning everything down and slaughtering the livestock. I considered killing the zoning administrator, had I went to his office the following day as I originally planned there's a very high chance it would have happened. I considered committing suicide for the first time in many years. For a week that darkness clouded my perception and I could not see any good thing, only feeling anger and despair.

Quickly after that darkness began to depart I was disgusted with myself, with how I had let myself get to a point where I would seriously think such foolish things even for a moment. I've spent this whole time in relative clarity auditing my behavior this year and after having dinner with that old man as the heavy blanket of snow buried all things I have finally reached contentment again.

The challenge at this point is no longer abasing myself with random burdens and slavelike work, but rather making the best of all things after having humbled myself to such a base standard of living. It is easy to go about looking haggard and homeless while living this way, rather it is a challenge to stay well-kempt and well-fed especially while unmarried. If I have any hope of trying to convince and present this kind of life as something others would want to participate in, it will only come if I allow myself to rest and appreciate the abundance of small gifts that come from simple living.

The Lord has given me many great gifts, but in refusing them this summer with a hard heart I have made myself poor in spirit and have cursed His name. I now pray that portion of the proverb before bed every night to remind myself.

I will return to Flashii in December. I am doing very well now after beginning to rest on the sabbath and otherwise taking care of myself, but I still have many things to set straight and I don't want to be distracted at the moment. I hope all of you have a wonderful fall.

szymszl
Developer
385 posts
joined 4 years ago
1 month ago (edited 1 month ago) #13447
i'm very glad he's doing better, thank you for this update if you end up reading this later

Keep going on with how you are now and everything will get better.
pui

terribleterrio
49 posts
joined 2 years ago
25 days ago #13516
reading this made me very happy, happiest I've been in about a month

thugginator
A Bit of a Goofball
104 posts
joined 8 years ago
22 days ago #13518
im really glad to hear that you are doing better.
While i cant compare your situation to mine, i will say rest is very important to mental stability especially during periods of arduous labor. I often have weeks or months where im expected to work miserably long hours every day. The only thing that genuinely kept me right minded was dropping everything when sunday rolled around. While you might be quick to judge your previous actions and decisions harshly, i think you've done a wonderful job all things considered. In my opinion, the mark of a great man comes from his ability to recognize his mistakes and use it as an opportunity to turn to a more positive page in life. And rarely have i met someone who has experienced so much hardship only to continue using that to positively build their character.

BTW- I love reading about your encounters with people. I always feel like a fly on the wall, in this case i felt like if there was a third chair at that table id be sitting in it, enjoying the same meal you were. The warmth of your character always shows through these short excerpts of your life that you feel comfortable enough to share with us. 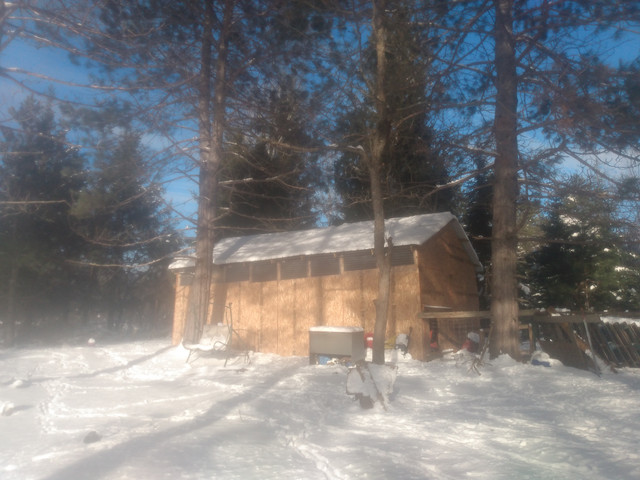 the barn from the outside, unfortunately we couldn't afford to paint it before the weather got cold. it's 16x32 with a 8x16 enclosure in the back as a feed store and workshop. i will come back later to take pictures with a camera that actually works properly

unfortunately my phone's antenna suddenly became damaged, likely from the cold, so it takes a very long time to upload files and it often fails so there won't be a video showing off the barn but i should still be able to take pictures 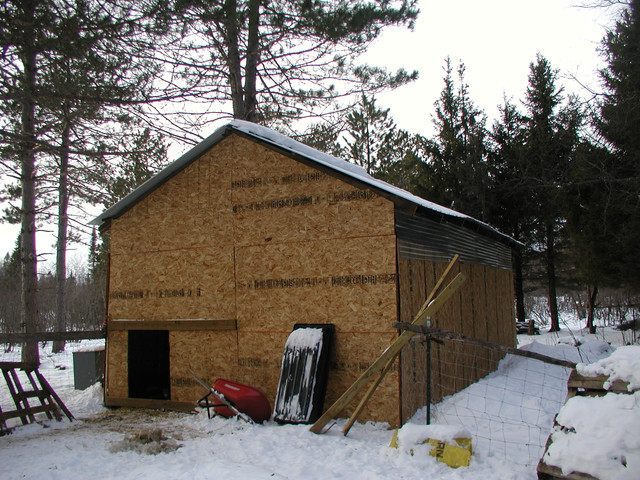 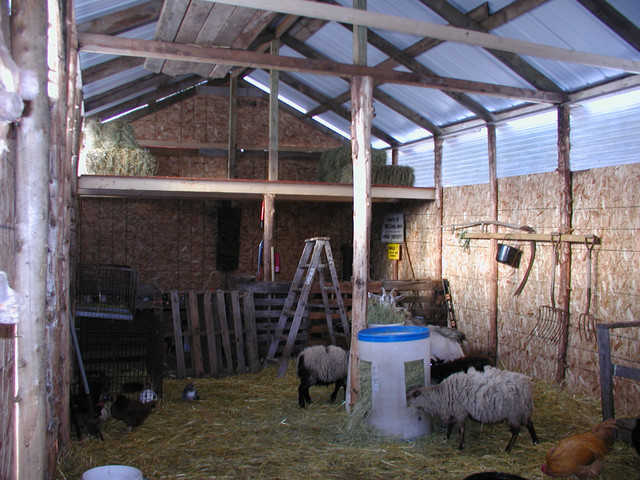 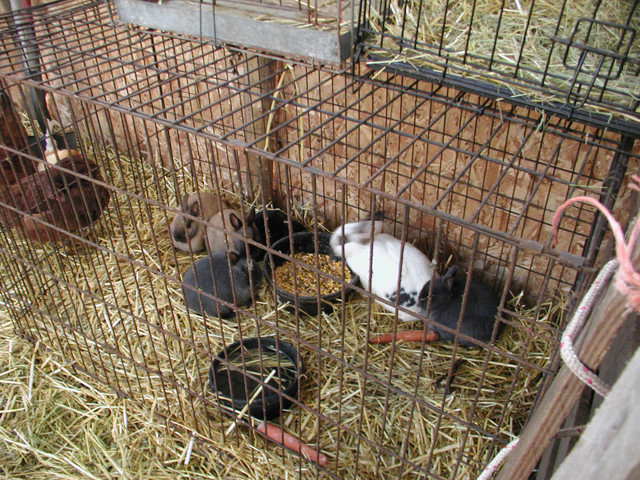 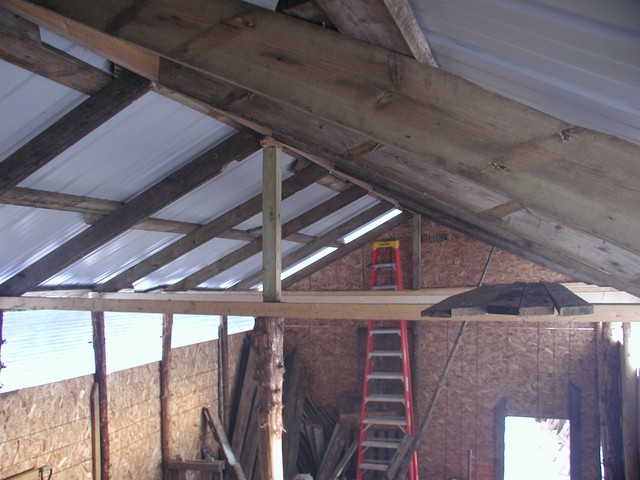 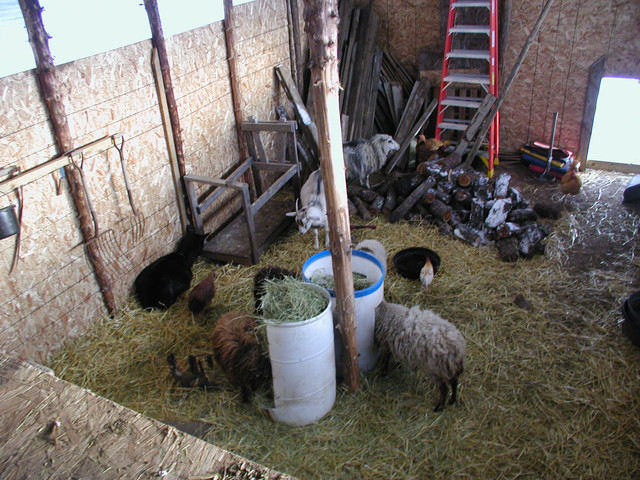 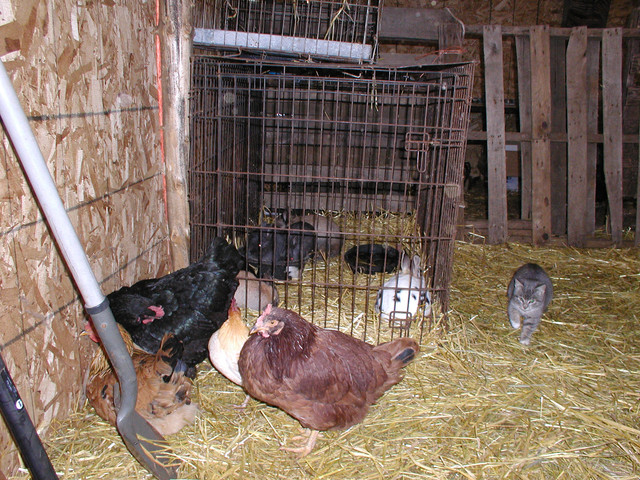 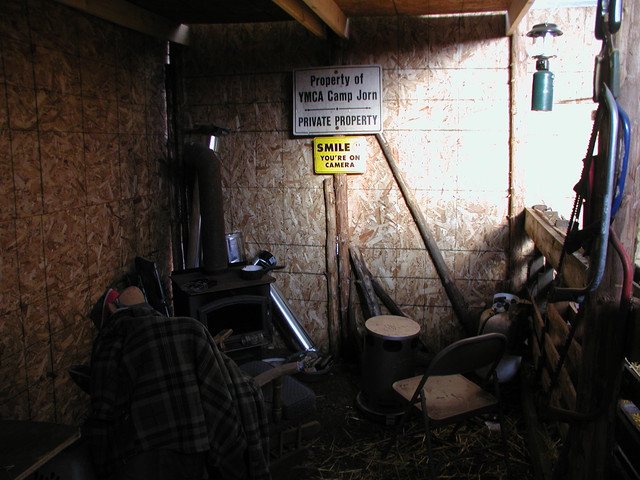 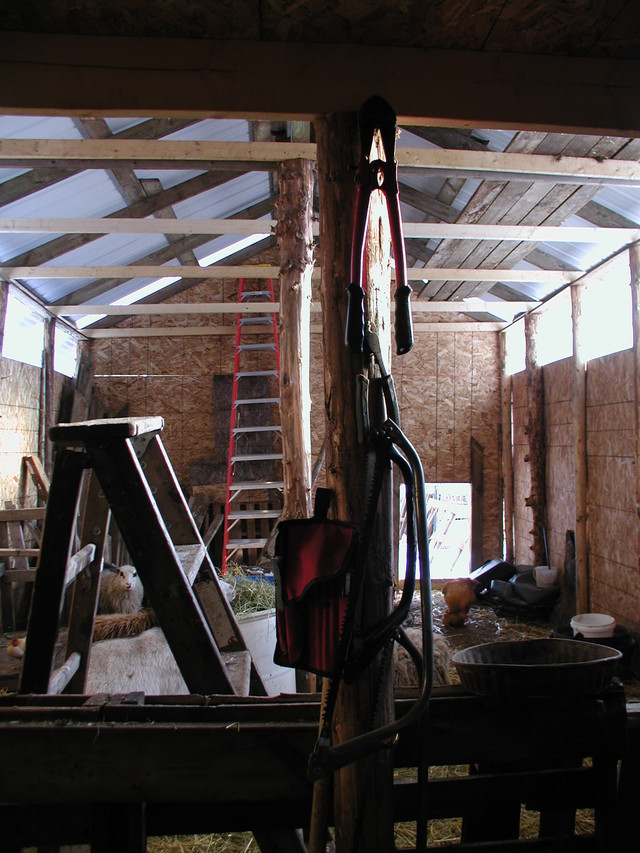 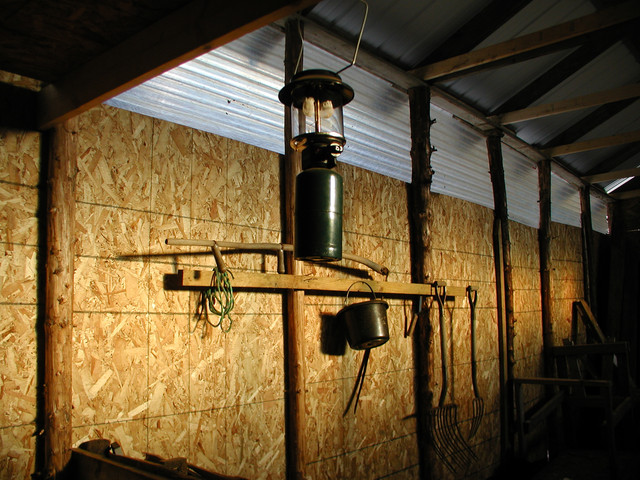 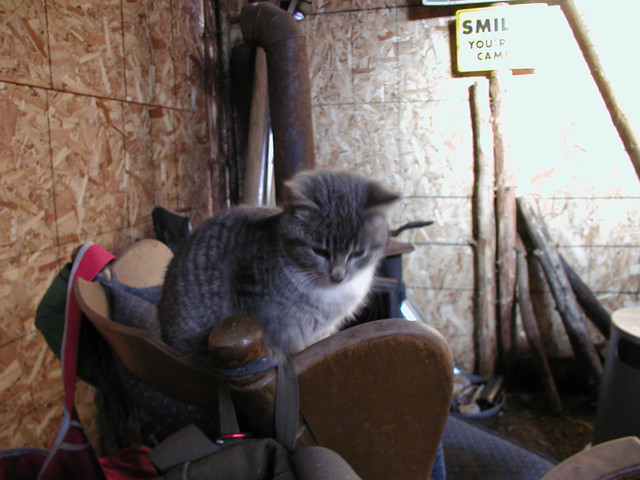 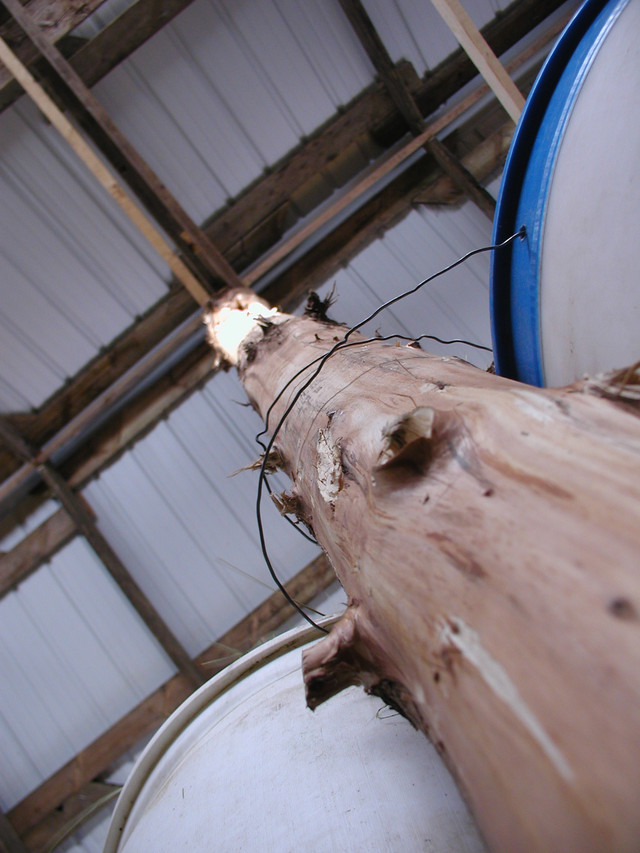 all the timbers i cut from the pasture and stripped the bark off with a cheap machete that i was able to bend around the trees easily, the rafters are 2x6s i saved from a dock they tore down at work a few years ago. overall i'm pleased with it so far and i have some ideas for future improvements over the next few years