gaythugmemes
Carly Rae Jepsen connoisseur
256 posts
Original Poster
OP
joined 6 years ago
1 month ago (edited 1 month ago) #13617
so i've been rather deep into the world of clone hero and the plastic guitars surrounding them recently, and as with any other hobby it has it's expensive rabbit holes that you can fall deep into. in this thread over the next few weeks/months/whatever i'm gonna be documenting my journey here into the world of plastic guitar fuckery as it progresses, as of right now i don't have anything too crazy i've done personally as i've only done one mod to my guitar that didn't even require soldering but i plan to change that as parts are becoming cheaper these days and mods are only becoming easier so here we go

i have two ideas for guitar's i'd like to try out; one's a bit more dip your toes in the water nothing too crazy but the other is absolute fucking wacko and i want to wait until i actually have progress pics to talk about that one but i drew up a little conspiracy theory board for the first guitar i'd like to fuck with, a beatles rock band hofner bass guitar for the wii

guitar hero/rock band guitars come in many shapes and flavors and you may be asking why do we want a wii guitar? why not just get a wired one for the xbox 360 and plug it into your PC like a normal person? the answer is latency of course, just like any other rhythm game us losers will know if they're 30ms off smashing their silly little buttons so if you want to play at a internet flexable level you gotta go fast and after years of testing the wii guitars are it

so the wiitars work by plugging into the nunchuck port of the wiimote, so how do you get that working on a PC? well, one company called raphnet made these little adapters for the nunchuck to connect to PC, and that used to be the golden standard and they're still good but they sell out often, kinda pricey but still kinda shittily made and people just don't want to rely on one place for that sort of thing so what do you do? just like anything else, throw a fuckin arduino in it

so now you can make your own dinky little nunchuck adapter with any sort of microcontroller thing you want and the latency is low as shit and if you order the parts in bulk they're cheap so gonna be making a couple of these bad boys https://sanjay900.github.io/guitar-configurator/guides/wii.html

this is another neat little mod i also plan on doing, this video is more meant for guitar hero guitars but recently a company called byte arts put out their own mech fret PCB boards for the rock band series of guitars, i have one of their strumfix's in my wired 360 strat now and it's easy to install and feels great so i imagine the mech fret board is gonna be nice as well, but looking to see if i can put my own switches on the board also (i promise im not paid by them they're just the only people that care about these guitars)

so if you're interested in this sort of stuff, that github page i linked a wonderful place to find all sorts of fuckery you can do with plastic guitars and the channel of the videos i have linked here is p good too, hope to have more updates in the next couple weeks or so with progress on the guitar i drew up above
STREAM THE LONELIEST TIME ON APPLE MUSIC AND SPOTIFY
https://music.apple.com/us/album/the-loneliest-time/1637009231
https://open.spotify.com/album/3l2Gi0hMjZV2uvKoWlFkoQ

gebruikersnaam
480 posts
joined 3 years ago
1 month ago #13624
custom gamepads are something i'm very much interested in. i still need to make an adapter for my PS2 gamepads to USB but all my microcontrollers don't have enough ADC inputs for all the control sticks (goddamn rp2040). i will be keeping an eye out on this thread. also if your current iron is poopy shitty harbor freight type shit i'd suggest getting something like a pinecil cause it's small and portable and somehow also cheaper than it's chinese counterparts.

gaythugmemes
Carly Rae Jepsen connoisseur
256 posts
Original Poster
OP
joined 6 years ago
1 month ago #13629
thanks for the iron recommendation, i haven't seen this one before but it looks really nice! i'm working on these guitars in collab with a friend of mine that builds PC keyboards all the time so i'm assuming he has a decent setup but i'll try and figure out what he's working with for next post

also so i actually have some hardware shit in the thread, here's the guts of my 360 strat in the middle of installing the strum fix plus, apparently i installed it a year ago today so thank you snapchat for digging up the photos i couldn't find in my phone i guess 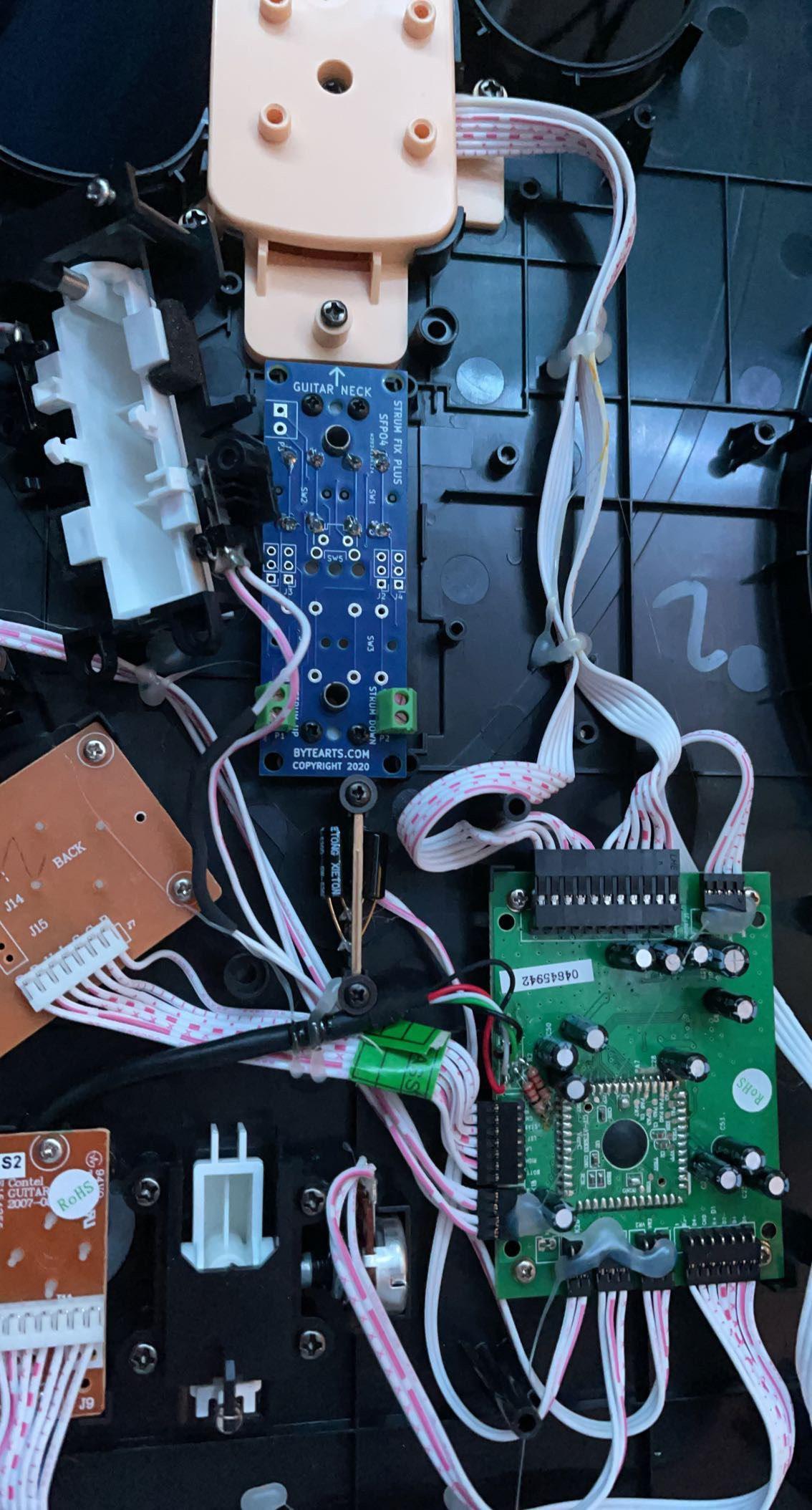 all you have to do is take the wires from the old strum bar, strip them and screw them into the little green pieces on the custom PCB, very simple no solder, i assume you could probably direct connect the shit for an even more stable connection but i haven't had any issues as it is for the past year now and it's so much better than the mushy piece of shit that is the default rock band strum bar. anyways, hope to have actual updates soon™
STREAM THE LONELIEST TIME ON APPLE MUSIC AND SPOTIFY
https://music.apple.com/us/album/the-loneliest-time/1637009231
https://open.spotify.com/album/3l2Gi0hMjZV2uvKoWlFkoQ
Forums Technology Hardware Engineering