A while ago Twitter made some kinda change to the API which caused pretty much all of anatweet to cease functions. I was a pretty big fan of this particular timeline spammer as the site itself was clear and without follow traps (aside from an easily avoidable checkbox) and was also quite fond of its collage feature, but that's why I'm here making this post right now.

Earlier I got a burst of the moment idea to recreate the mentioned collage feature, and I'm actually getting pretty close to matching the original. My positioning code is still pretty primitive (literally hardcoded) but it's a start. Considering it still needs a bit of tweaking and polishing before being something that can be publicised, I won't share a link just yet but will edit this post when it's ready.

Here's some examples of what output from the original looked like (also personal reference material): 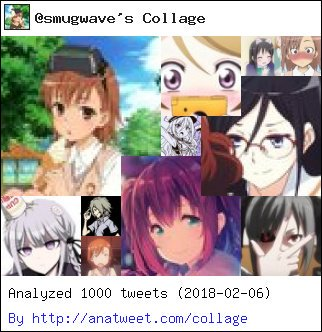 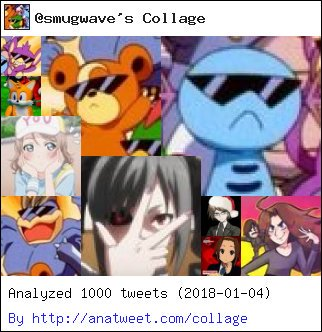 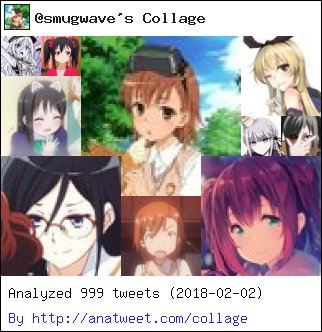 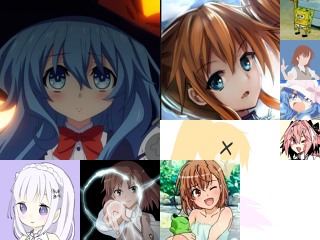 The positioning is always like this, unlike the original where it's slightly dynamic. I'm not sure if there's any particular logic behind it or if there was just an array of positions but I'll figure that out sometime later. I've also noticed that the amount of images isn't actually a constant either in the original, sometimes it appears to be 10 and other times 11.

Got a number of proper positionings, they range from 10 to 12 icons.

Pretty much ready now, but I gotta do some cleaning up before I can make it public! 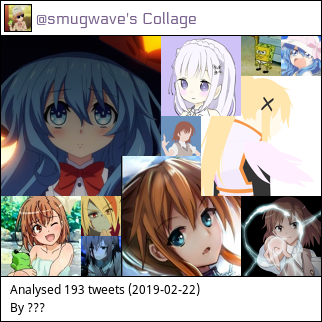 flash
Administrator
2,294 posts
Original Poster
OP
joined 8 years ago
2 years ago #2614
Creation of the image and sharing it to Twitter is pretty much done, I just need to bother to do the client side stuff.

flash
Administrator
2,294 posts
Original Poster
OP
joined 8 years ago
2 years ago #4105
I actually finished it but I'm not sure I want to release it because I'm afraid my server will die. But here's the link anyway lolw https://flash.moe/twitter/

flash
Administrator
2,294 posts
Original Poster
OP
joined 8 years ago
2 years ago (edited 1 year ago) #4116
looks like a missed a line when moving this out of the old flash.moe backend

thank you for this video epic flash dev content