I'll be honest, I really wanted to hate Party Babyz. We as gamers have, after all, been trained for years to be suspicious of mini-game compilations, to ignore products with babies on the cover and to absolutely abhor games using the letter "z" in their titles as an indication of a plural. I had all these great jokes lined up, a whole list of witty and sarcastic remarks that would have forced the developers into early retirement and ultimately secured my reputation as one the most scathing and hilarious freelancers the IGN readership had ever seen. That list now sits crumpled at the bottom of my trash bin.

Why, you ask? Because, despite one of the worst examples of botched box art marketing I've ever witnessed, Imagine: Party Babyz is one of the finest mini-game compilations to ever grace Nintendo's home console.

Party Babyz tells the story – yes, you read that right, Party Babyz tells a story – of a young woman named Katie's first year at The Baby Club, a nursery where she herself attended as a young child. Here, under the tutelage of Headmaster Anna Grames, Katie hopes to learn the ins-and-outs of proper child care and earn her babysitting degree – by ruthlessly pitting the young children against each other in a series of 30 child themed mini-games. The story here doesn't make a whole lot of sense but then again it doesn't really have to considering all it's there for is to provide some extra context and justify a single player story mode.

After all, the mini-games are what truly matter, and Party Babyz fortunately offers some of the best bite-sized challenges this side of the original Rayman Raving Rabbids. The game offers 30 wholly unique mini-games (the back of the box claims it offers 40, but this is only true after some creative number stretching) spanning the four seasons of the year. Most of these challenges are appropriately baby themed – including but not limited to counting sheep before bedtime, milk bottle drinking, changing diapers and brushing teeth – but offer much more depth than their setting would imply. A vast majority of the mini-games are multi-layered, tasking players with juggling more than one objective at once and providing a level of strategy and depth unseen in other, similar titles shoveled onto the Wii these past few years. 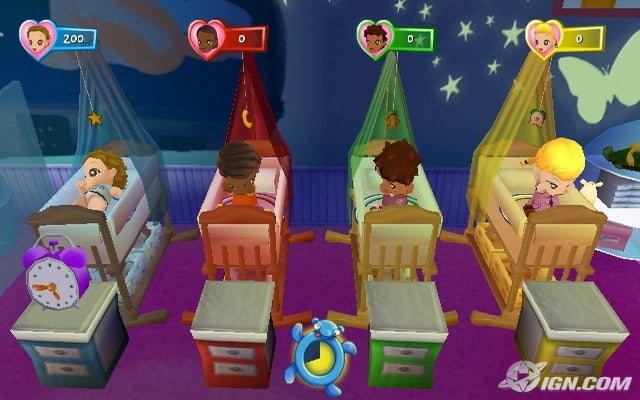 
One mini-game in particular, "The Mad Dash," actually offers three different mini-game control styles rolled into one. Players start out by rocking the Wii Remote to the left and right, then switch a third of the way through to bouncing the controller up and down until the babies reach the final checkpoint, where it becomes a race for who can hit the "2" button the fasted to wheel the tricycle past the finish line. Apart, none of these control methods would have been very intriguing but together they create a virtual triathlon much more than the some of its parts. Lazier developers would have split this challenge up into three disparate mini-games to pad numbers, but the fine folks at Visual Impact thankfully chose quality over quantity.

The other challenges offer similarly tight controls and solid motion detection. There were a couple of instances where I felt the game wasn't tracking my movements accurately, but a majority of the challenges reacted exactly as they should have. Providing accurate controls seems like it should be a given for any title, but I've played my fair share of mini-game compilations these past few weeks and I can ensure you that Party Babyz is one of the best in this particular area of design.

Winning these mini-games nets players both the opportunity to unlock further challenges as well as customizable outfits for the babies, adorably referred to as "fancy dresses" throughout the game proper. Normally, netting these sorts of prizes means very little to me, but for some reason the fancy dresses really grew on me. I found myself replaying earlier mini-games by myself – a practice I normally try to avoid – just to unlock the final costumes simply because they're so quirky and well designed. There are 40 fancy dresses in all so it would be foolish to list them all, but some of the standouts include costumes designed after a knight, pirate, Viking, caveman, gladiator, alien and even a little red devil. These unlockable costumes would normally be a throwaway feature save for two other defining features of Imagine: Party Babyz, the great art style and deep customization options.

Frankly put, Imagine: Party Babyz' art style is amazingly appealing. It reminds me a bit of EA's MySims titles, except less blocky and more defined. While not technically impressive by any means, the game's graphics are remarkably charming, creating a unique visual world that remains consistent throughout. Unfortunately, I feel the simple, childish art style will also prove to be one of the pieces of overall design that keeps most gamers from ever giving Party Babyz a second glance. Gamers willing to get over established visual prejudices, however, will find a very attractive, crisp engine oozing with charm and personality.

Party Babyz also offers a robust amount of customization options so gamers can mold each of the four babies how they see fit. The system is surprisingly versatile, offering a nearly Mii-caliber virtual avatar creator for use across both single and multi-player modes. You won't get the facial options like you do with the Mii Channel, but the clothing selection more than makes up for that fact. After all, my bleached mullet-quaffed baby adorned in chicken legs and sumo torso could take your pitiful Mii any day of the week.

What's more, these custom creations can be used in any of the multiplayer games, allowing friends to each have their own personal baby to compete with. Let me tell you, there is very little in life worth watching more than a tiny, armor-laden Red Riding Hood duke it out with a devil-horned pharaoh over possession of the daycare's only down comforter. It's pretty telling that, in a recently conducted democratic polling of ten college students, Imagine: Party Babyz was elected over Rock Band 2 to provide the primary source of virtual entertainment for the night.
Verdict
Yes, Imagine: Party Babyz features dancing toddlers on the cover. Get over it. Even on a console as mini-game saturated as the Nintendo Wii, Party Babyz manages to distinguish itself in every possible category. The challenges are fun and diverse, the controls are solid and varied and the art direction is simple and appealing. Its gameplay is definitely not intended for the toddlers it features on the box, but gamers old enough to grasp the depth and strategy within will have a great time. The game doesn't do anything entirely unique and probably won't convert devout haters of the genre, but gamers looking for a solid new mini-game compilation need look no further.

Ok thanks for reading bye!

flash
Administrator
2,238 posts
joined 8 years ago
1 year ago #7732
yeah that was pretty disappointing

yurrieissmart
ya drop a penny you pick up a dollar
40 posts
Original Poster
OP
joined 3 years ago
1 year ago #7734
your all blockled from replying to me. do not waste my freakingh time.
a


baby flesh is really tender, however these partybabyz have been working out vigorously. Thus the muscles on the babyz will have been developed enough to give off the rough and tough meat taste. Unfortunately this will ultimately hinder the taste and muscle to fat ratio on the babyz' flesh and overall make the flesh unbearable to eat

Sora
formerly former gamestop employee
878 posts
joined 2 years ago
1 year ago #7740
I agree that the Iron Giant was a good film, but some of your points are terrible. Like the length, it's definitely 1 hour and 30 minutes, NOT idk. The Iron Giant has 500 calories in it, do your research next time? There are 5 routes in the Iron Giant depending on if you can achieve frame perfect input controls during certain scenes you can skip two of them, analyze your frame data next time? Those were the worst parts of the review, the rest made me deaf and I died.

Chimpstar2070
20 posts
joined 2 years ago
1 year ago #7745
I didn't like the part of the movie where he said he was "Superman". To be honest a more accurate name fore him would be "Iron Giant" because he is a giant made of iron. Maybe "Giant Robot" is a better name actually. Wait, what was this movie called? Is this is the one about the rat in the hat? Whatever, "Giant Robot" is a better name.