because I forgot to do something special for its 6th birthday. You can view this post as a PDF here. These are several screenshots I’d taken for a project I started but abandoned in 2018.

This one’s lifted from a random Youtube video, but I’m pretty sure it’s the earliest evidence of the site I have. At this time, I was still figuring out how anything worked, as is probably apparent from the screenshot. For whatever reason I also did all my HTML editing in Microsoft FrontPage Express 98, the one that came with Windows 98, because at this point, I was only in it for running rather than making. This also implies that the site didn’t use CSS, at all!

You can really see that I was on that brony shit back then still in the names. I think at this point I started doing manual edits to files rather than use FrontPage Express as well. I’m not sure what’s up with that spam poison badge because I never used anything of the sort, I might’ve just though the badge looked cool or something. 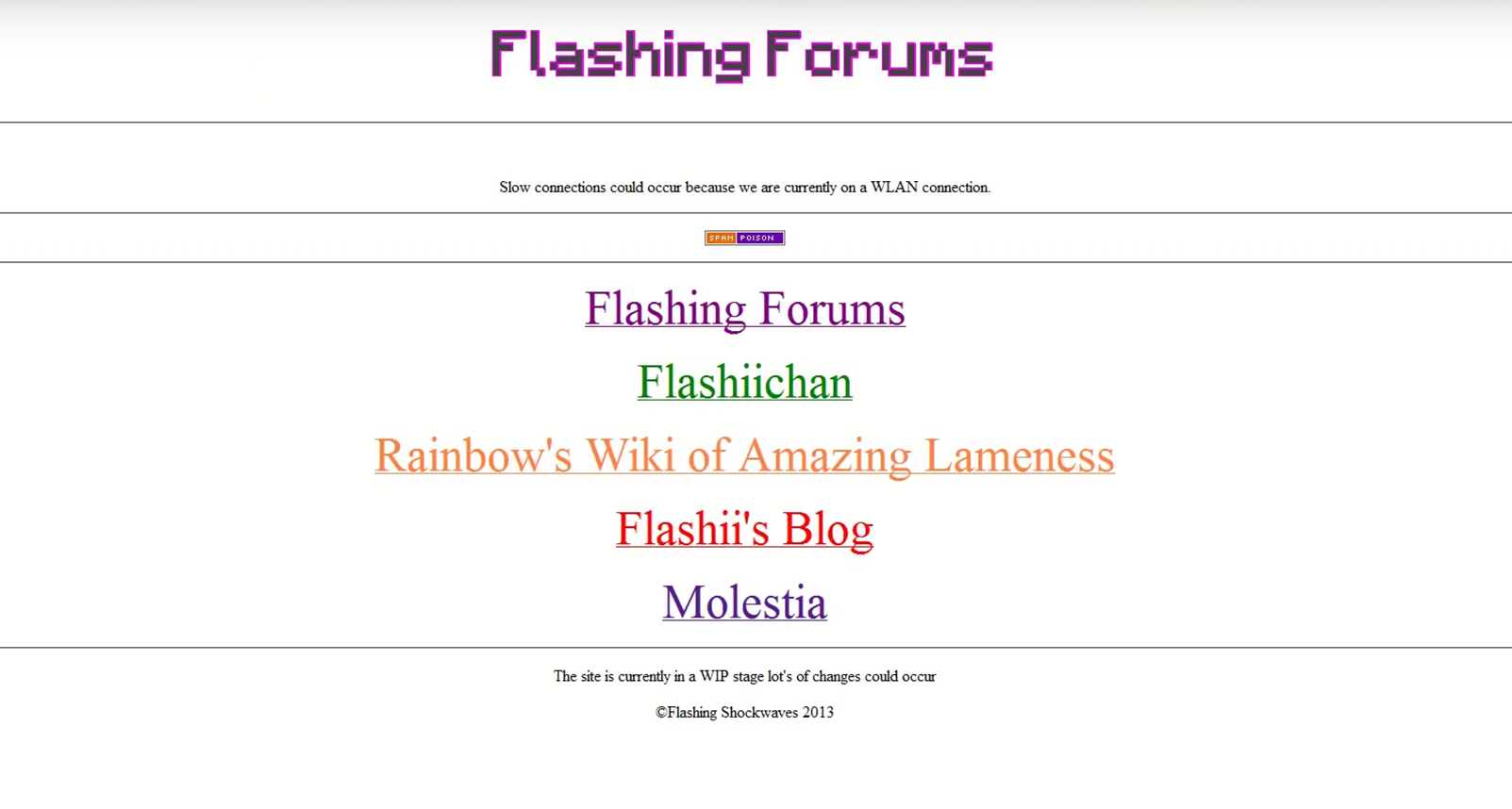 The first instance of the purple clouds! The panels would change colour when you hovered over them on this one. It also used CSS, the future is now! The chat quote displayed would randomise on reload, this concept stuck for quite a while and I want to bring it back sometime with the upcoming Flashii Chat. I’m pretty sure I ripped this design off from some company’s product page but let’s not go into that. 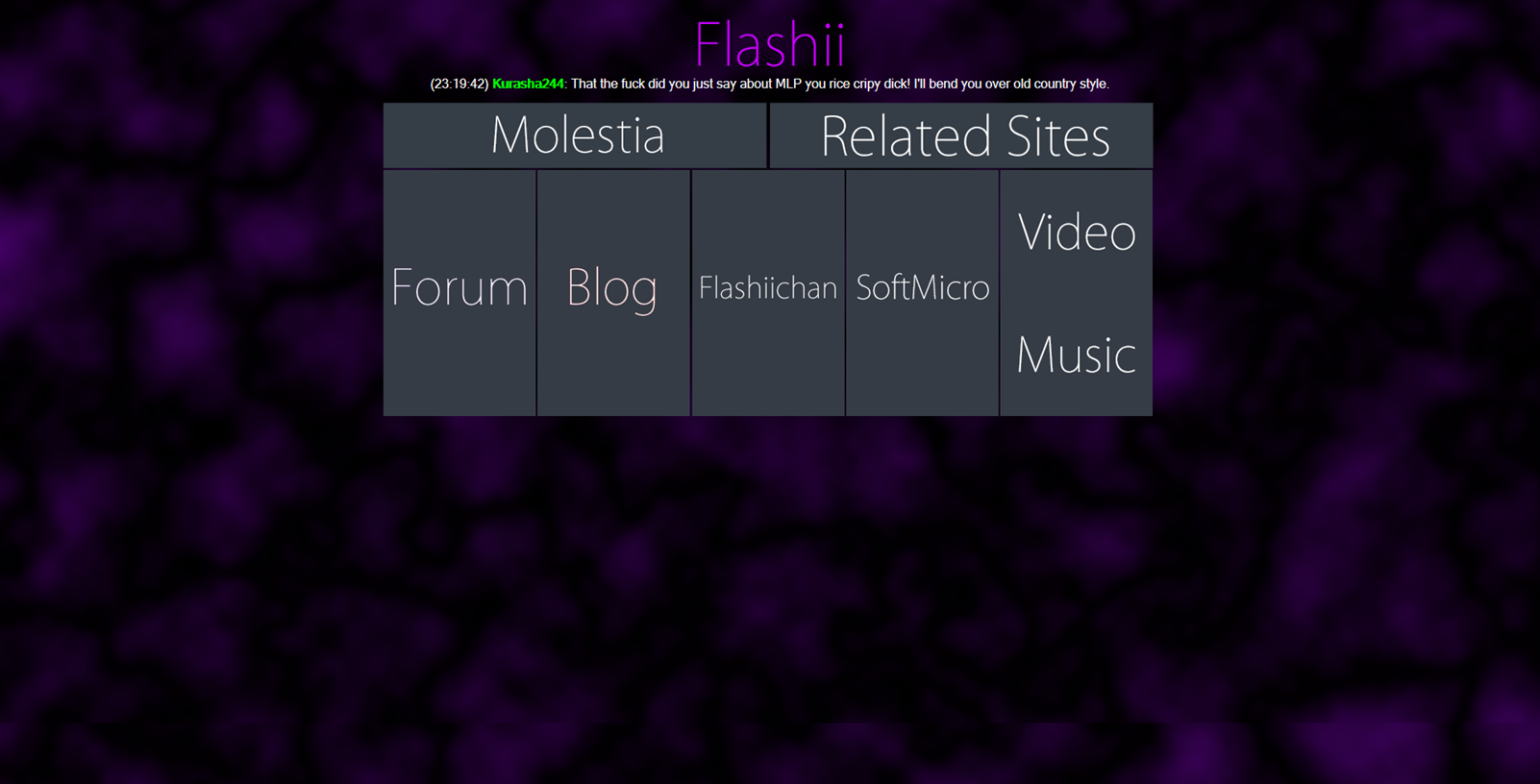 Realising that just using some company’s stripped-down product page was dumb, I went back to making stuff my own. The month prior I had gotten back into anime which you can clearly see front and centre. Funnily enough I went back to using just HTML with no CSS again for this one, later I did adjust this to use CSS (mainly for displaying a different link colour on hover) but I sadly have no captures of that. This design was also the first face of Flashii.net, prior to this the domain was Flashii.us.to (since it was free, and I was a broke 13-year-old). 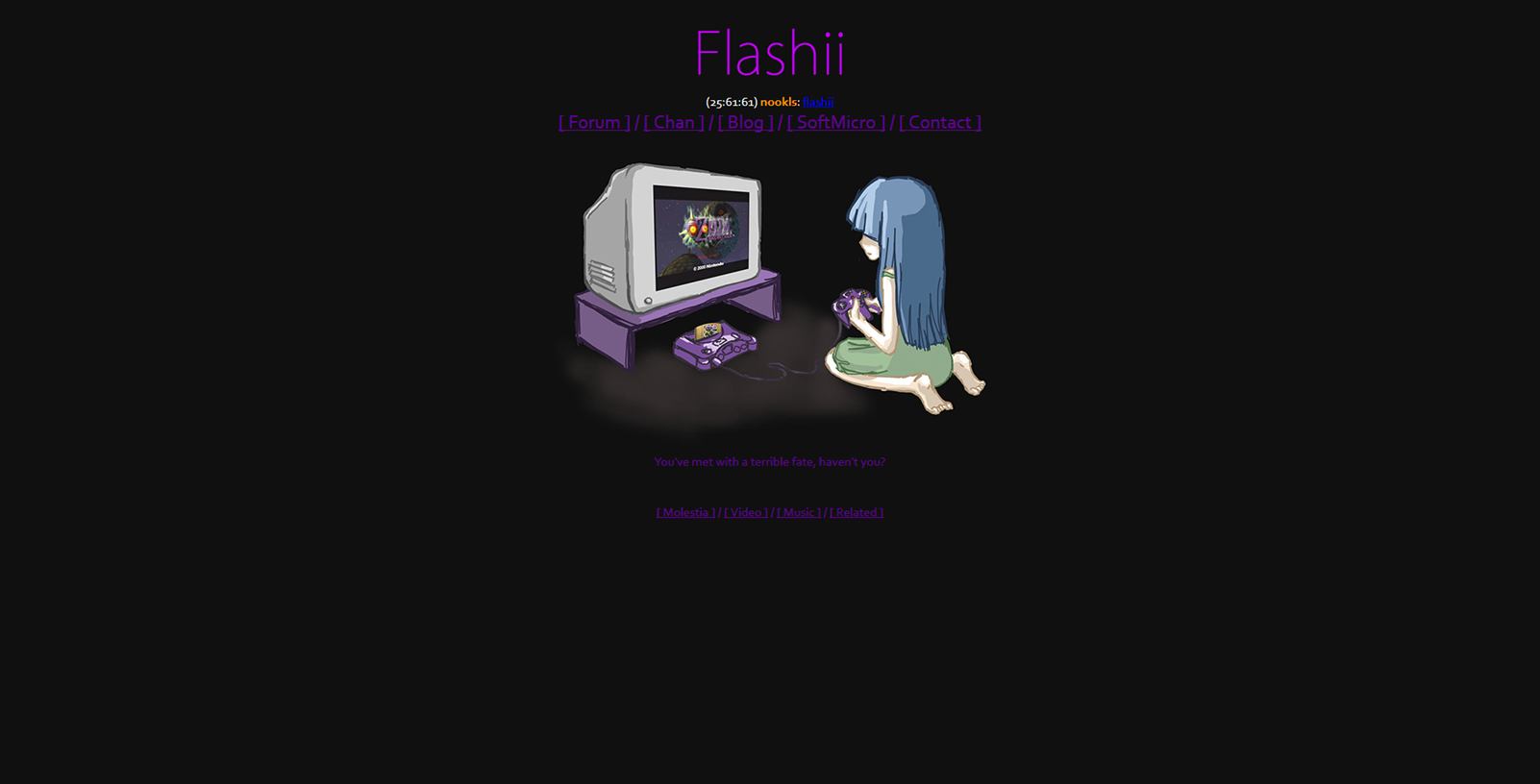 The blind spot of 2013 between July and October

During this time, I started heavily experimenting with writing my own code and designs. Sadly, I lost all of this in a hard drive failure and annoyingly enough and archive.org did not capture any of it. Imagine A LOT of gradients.

Purple clouds return but now also with fibres! I was pretty edgy during this time period; a number of people can attest to that and people with a keen eye will also notice it within this screenshot. 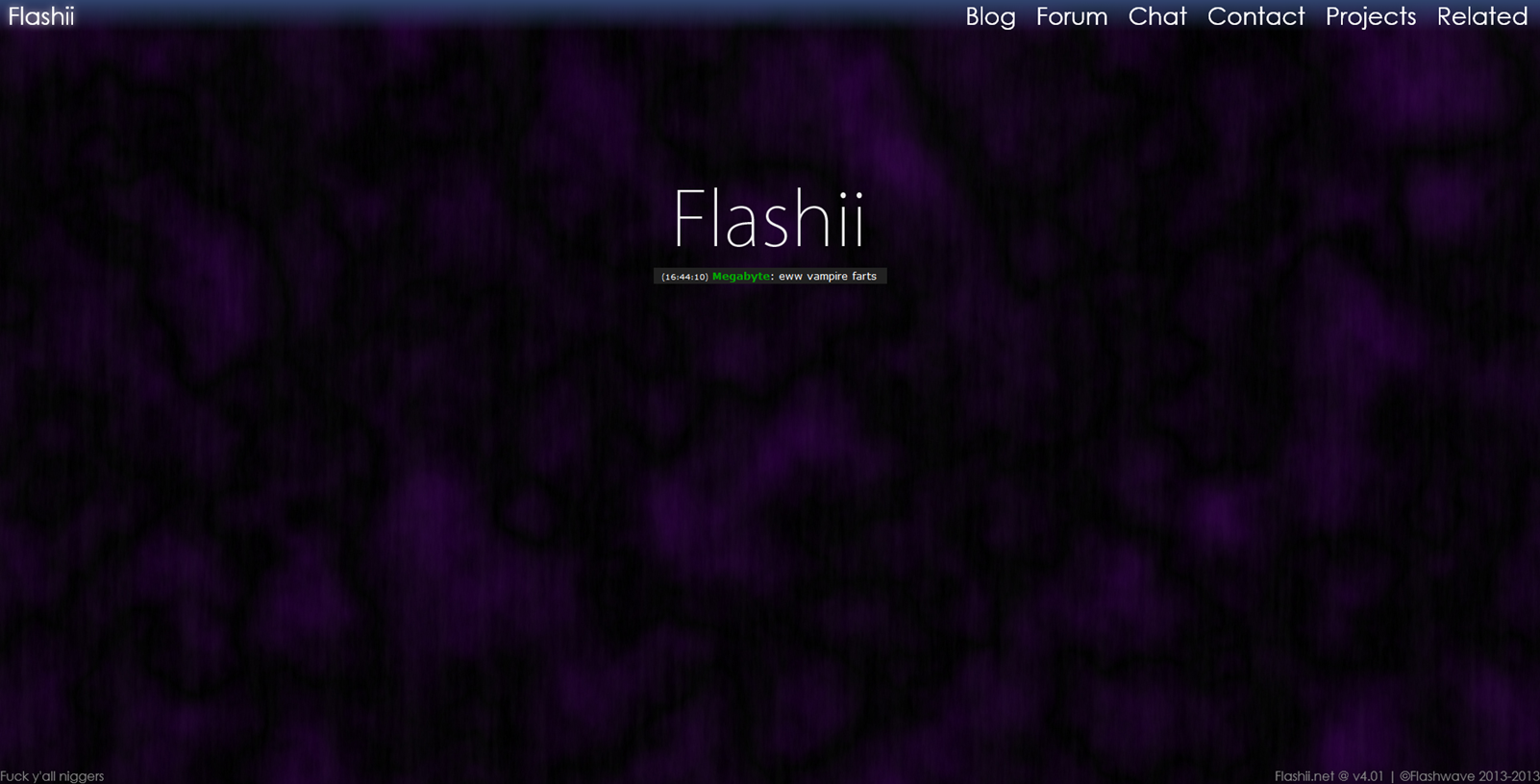 After an edge-fit in late December I killed the site off for the first time and solely used the blog part of it, but I quickly grew bored of this and as I had recently gotten into imageboards I decided to make my very own 4chan rip-off. Most of this played in February so for January you may enjoy this screenshot of a downtime page that happened to be taken in January for a system reinstall. 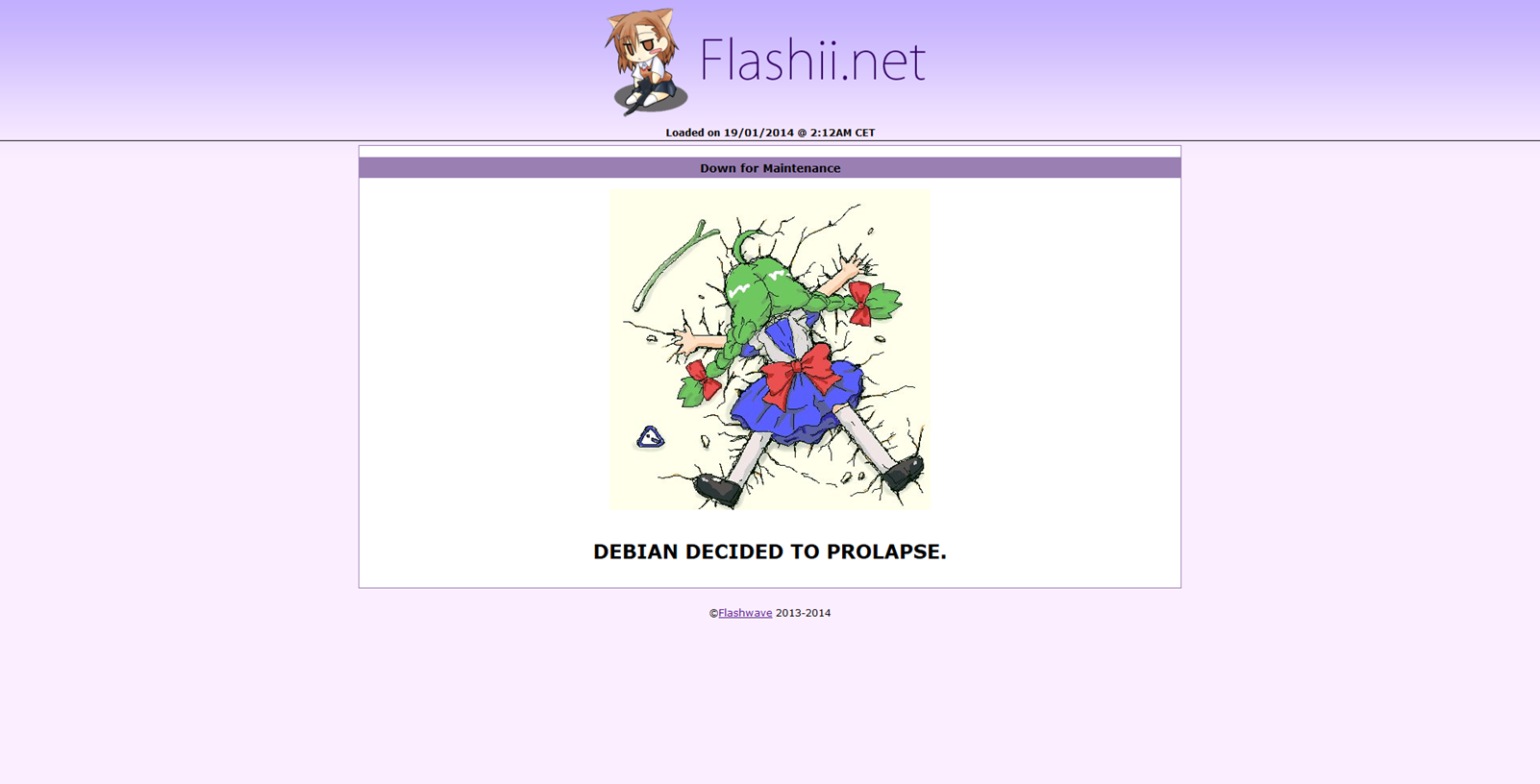 4chan rip-off is in full force! Except I couldn’t figure out how to put a smaller container on the right side on the bottom there. The boards ran on the horribly exploitable Kusaba X and honestly didn’t live that long regardless which makes this the first instance of multiple screenshots for one era. 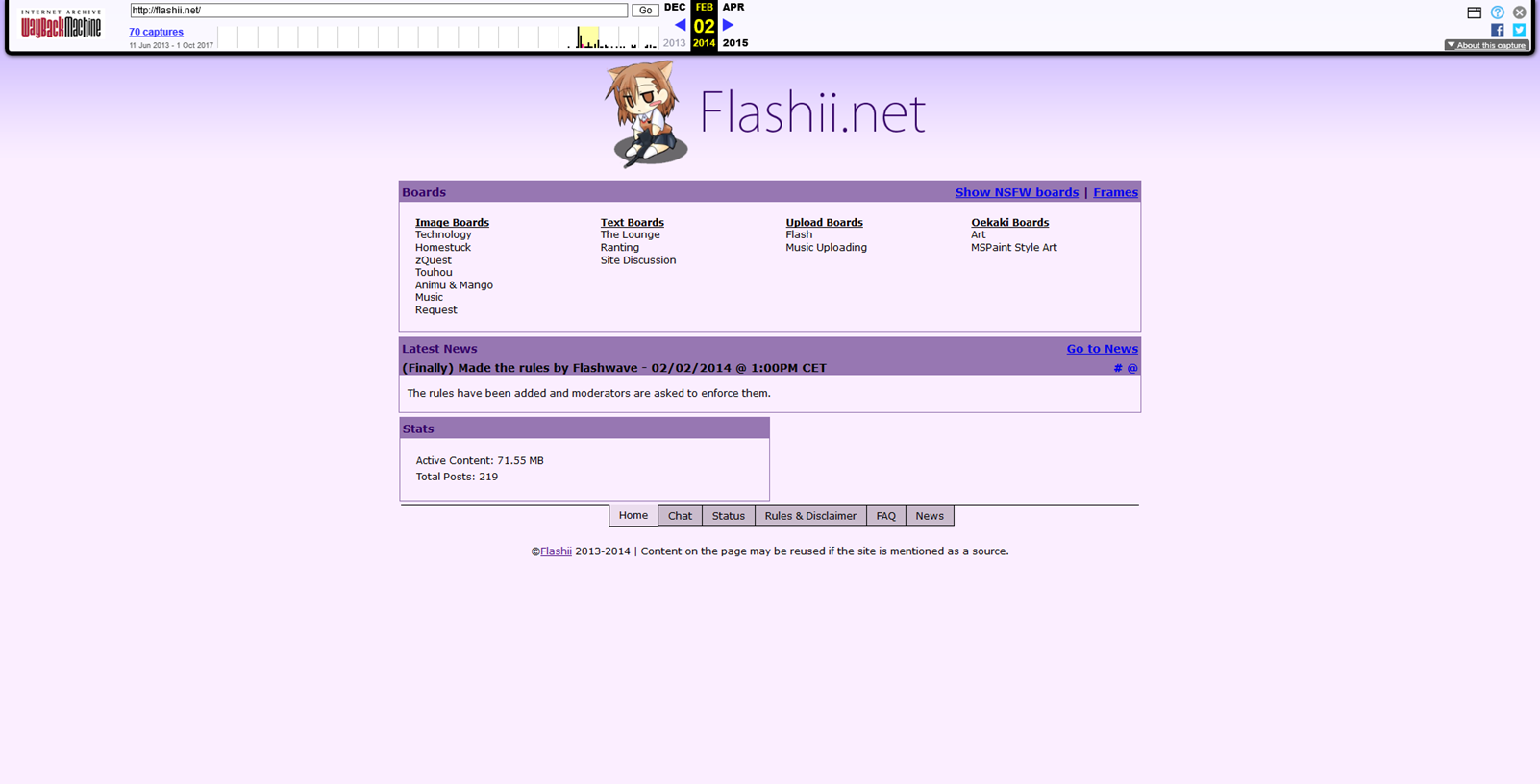 The aftermath of the chan-ening. Started using the site as a personal site, but with a chat, again for a femtosecond. I promised a few things that I kind of followed up on, but horribly so I removed them later again (mainly the legacy mode thing). My English was even more horrid back then, can you believe it? 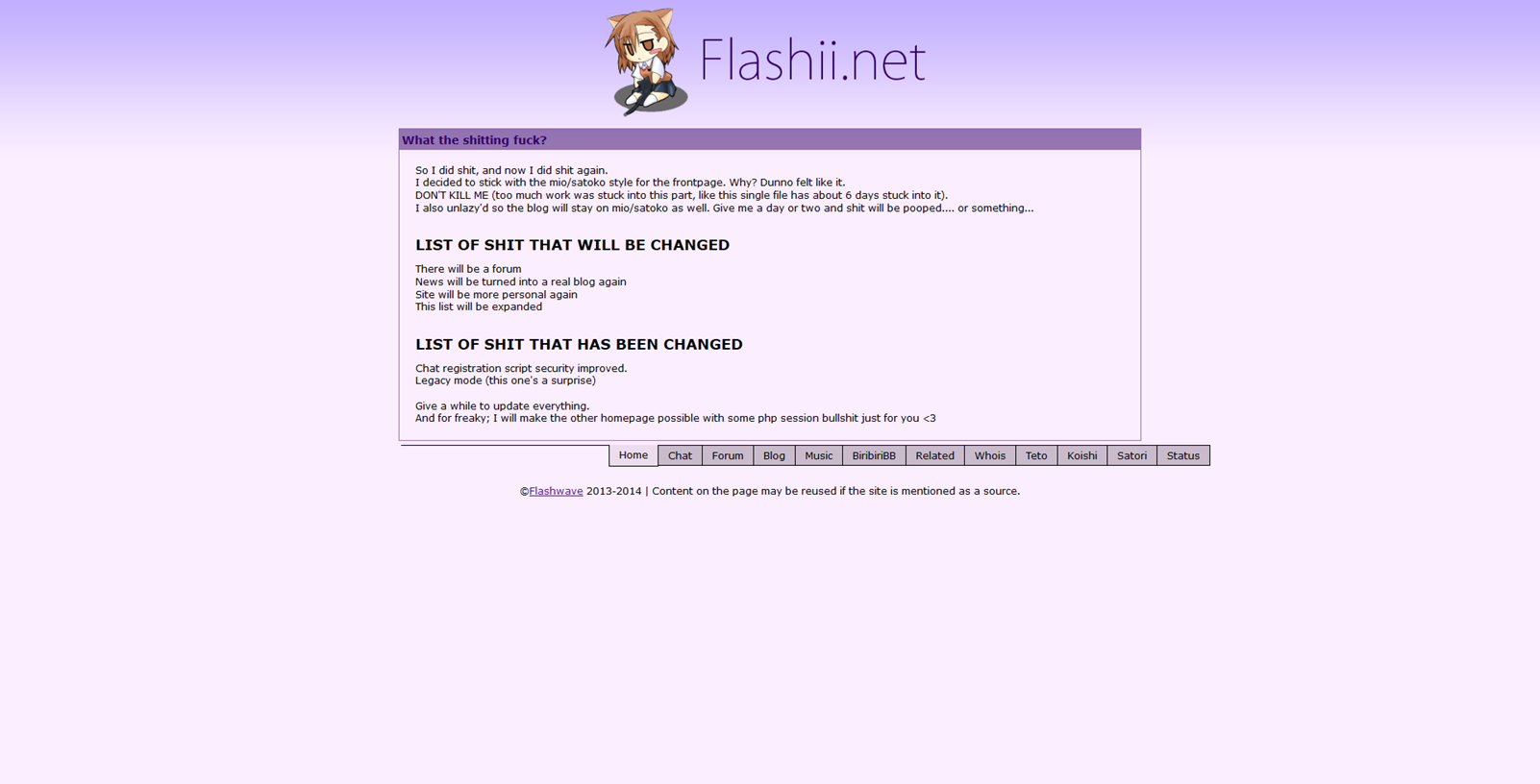 Somewhere around March I started working on a new community-based backend for the site, the only community part of it mainly remaining to be the chat but you could now view other people’s profiles which was a huge achievement for myself at the time. The immense joy I felt when I first got avatar uploading to work back then seems so strange, but that’s what any milestone is like I suppose. As a quick side note, all original news posts can still be read dating back to of April 2014 here on the current website! 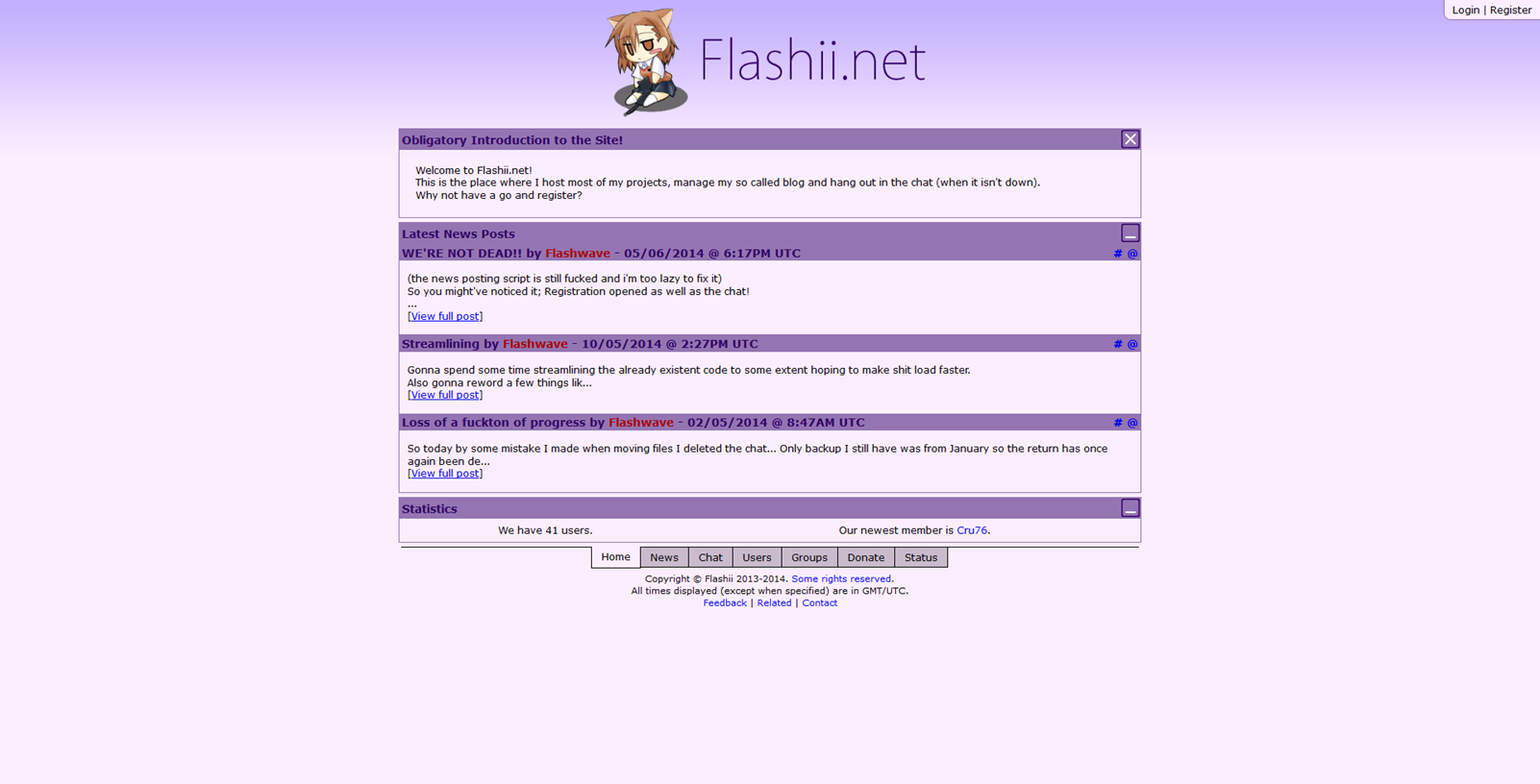 For Halloween month I put a cool stolen hat on the stolen logo and replaced the text poorly. You’ll also notice that a couple things changed like news being hidden by default and the front page now having huge register and login buttons. Around this time, I was also working on a redesign that would last until the demise of 2017. I still set the logo to that image for every October as per tradition. 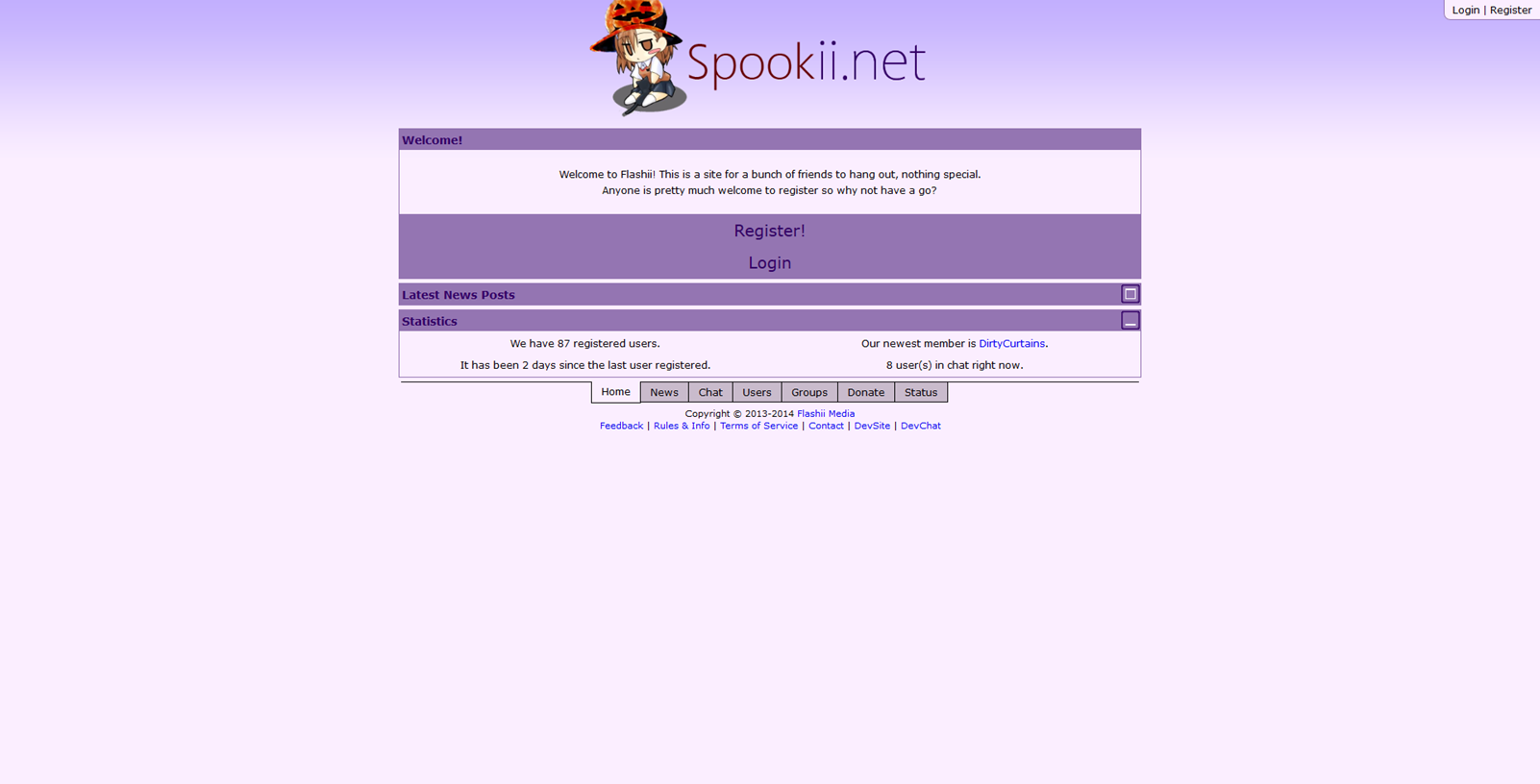 In October 2014 I added the first open source status page, you can still view the news post here. I have yet to bring this part of the site back but we’re getting there sometime soon. Another cool thing about this one was that it would redirect you to different mirrors depending on how fast an image loaded and had my first instance of auto updating from a Github repository. The mirror stuff will likely not return soon, but who knows what the future holds!

December came with a few minor changes, mainly Christmas hats, styling updates on the user bar and a merger of the users and groups listings. This was also the first time a lot of people noticed that Misaka had a cat on her lap because of the Christmas hat! Here we’re almost at a 100 users, which is still something we have to reach on the current site, but we’re getting close at 93 as of writing this. 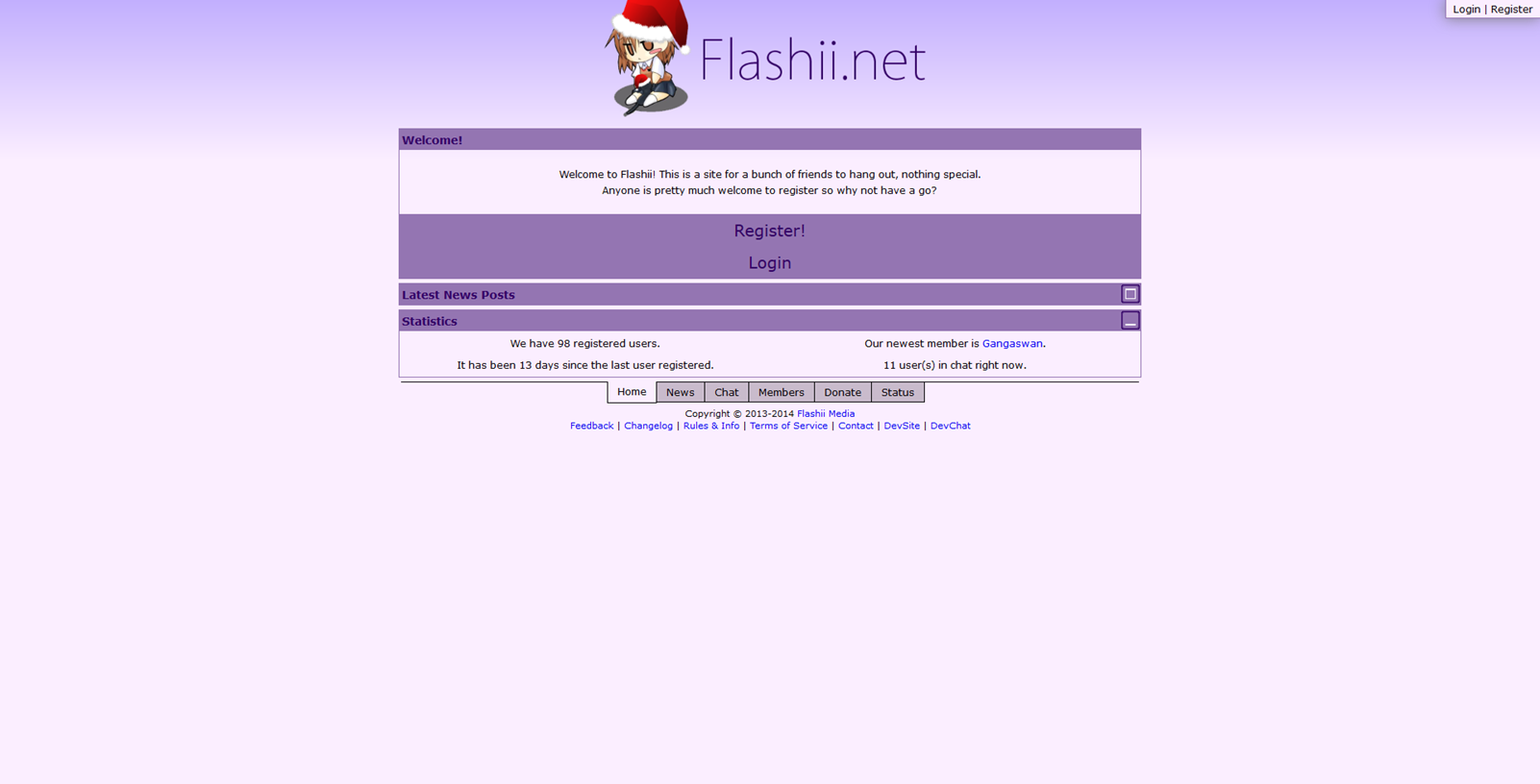 A post announcing a pretty huge change, the departure from AJAX Chat to malloc’s custom Sock Chat. It was a huge beneficial different considering the former would check for new messages by manually asking the server every 2 seconds, whereas Sock Chat would keep a constant connection also lowering bandwidth usage and server stress. An IRC gateway was also promised but this ended up being a little too ambitious for the time and implementation. The post also outlines the announcement of an API, but nothing of the sort was also implemented for a long time. Sock Chat would also solve a long-standing annoyance where site and chat sessions were different, for AJAX you’d have to log in again to use the chat, fair enough this was mostly a fault on my part since I couldn’t figure out how to bridge it properly, but it was pretty huge nonetheless. You can view this news post here.

The second anniversary of Flashii as a site, not much changed to the front page other than the embedded news post as I was hard at work on the redesign. 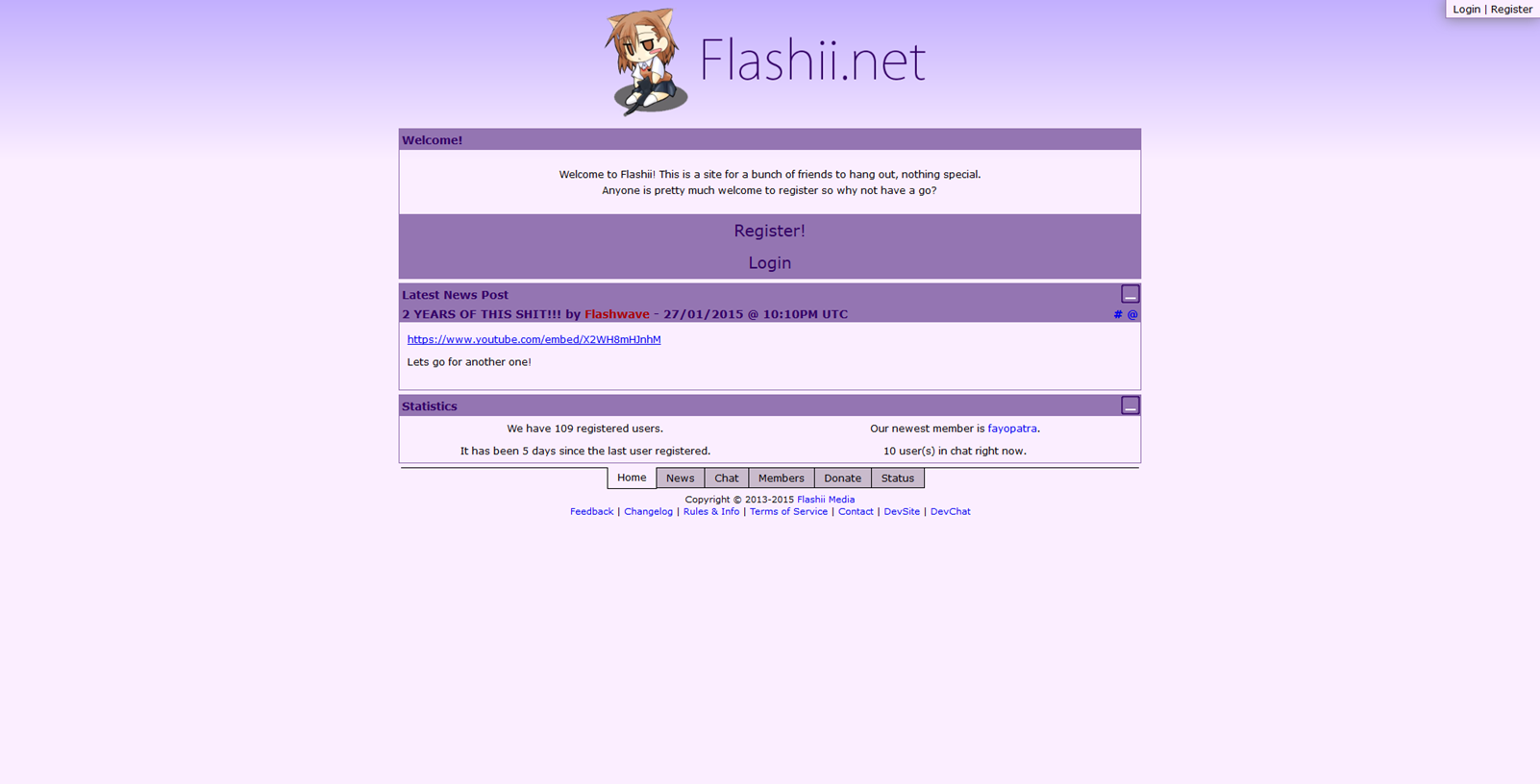 As for a last appearance of the 4chan-like design, the chat login page! This was honestly probably the most viewed part of the site and people probably most likely skipped the main site often and went directly to this instead, which I don’t blame them for because the double login and lack of features meant there wasn’t much to do on it anyway. One quirk about this is that the username entry was case sensitive because I was too afraid of touching the login code too much. I still actually had a copy of this chat sitting around and it can be used here with your current Flashii credentials (and case insensitive login username), so you could say Flashii already has a chat!! Although not really because AJAX Chat is something we really don’t need back. 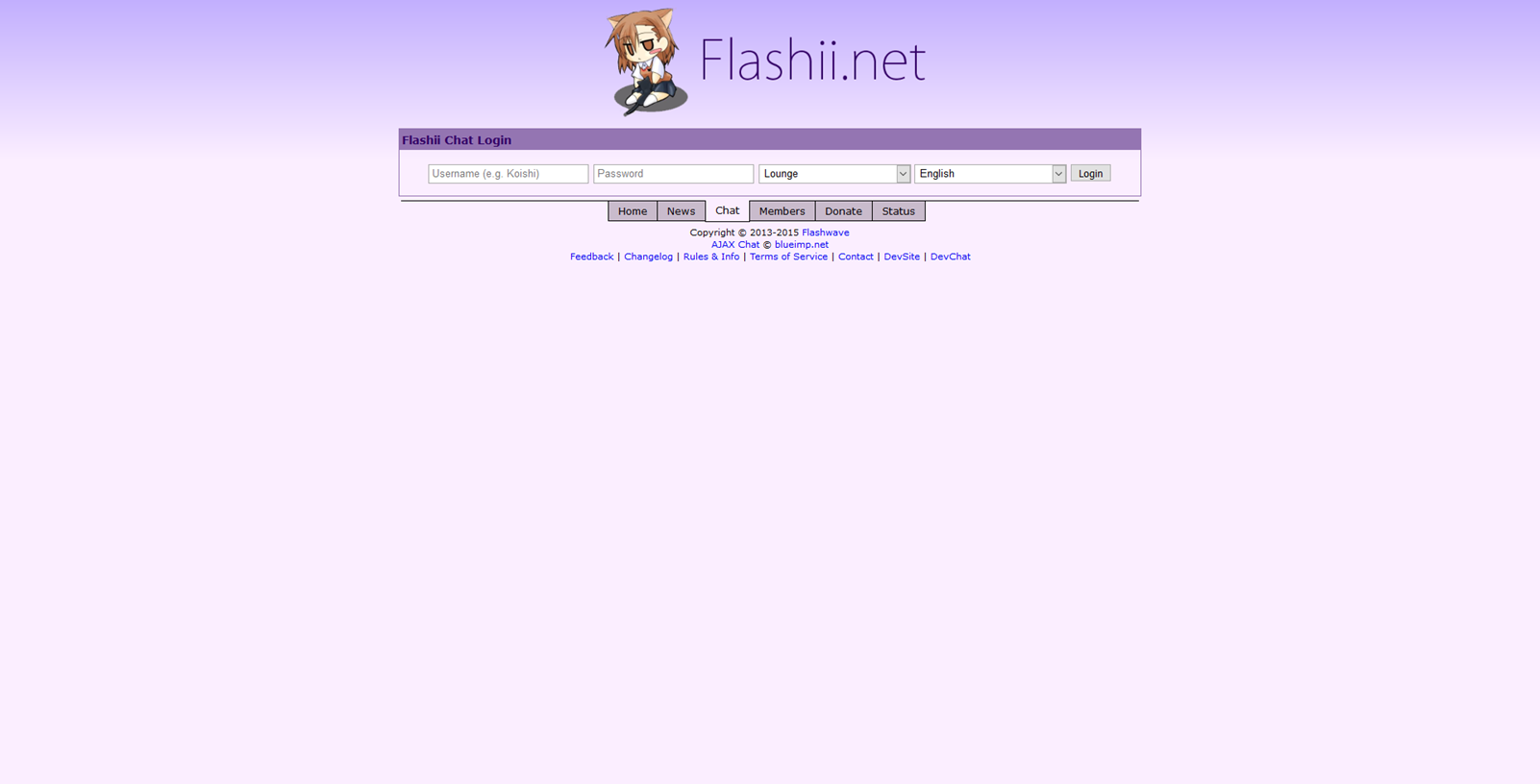 After having another edge fit I temporary closed the site, during this time malloc hosted a Sock Chat instance of his own so the Flashii users had somewhere to sit around. In February 2015 had started a rewrite of the site’s backend in a less spaghetti code fashion, and after the edge settled down, I used this opportunity to switch the site to use this new system. Despite this being the first time, this design has been seen in these screenshots, this design had been in used since somewhere in February too but it was never captured by archive.org. 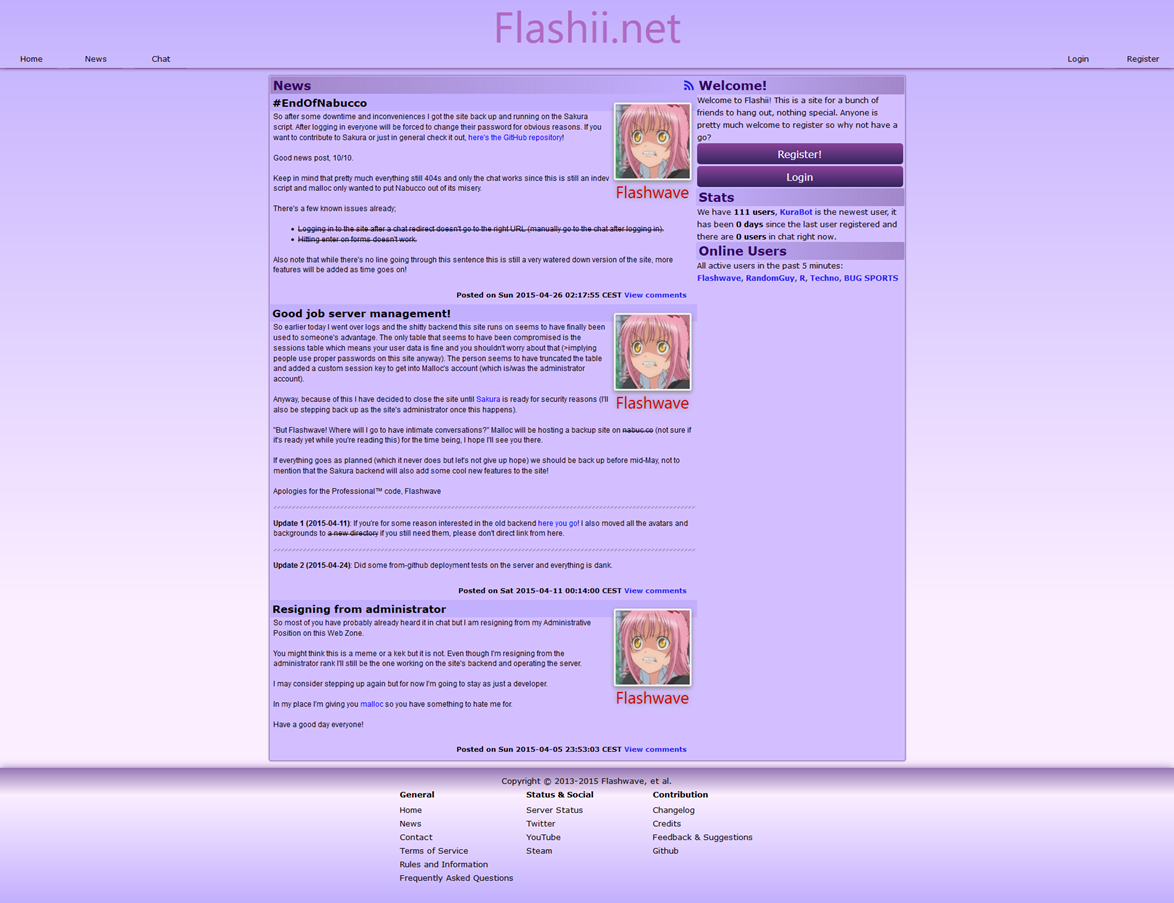 Not much changed to the software in this period, but I did switch providers twice! From the start in January 2013 till June 2015 the site was hosted from a Dell Dimension 4550 running on a Pentium 4 from my house. Initially this thing stood in my room, but after it nearly killed in my sleep because of all the dust, we moved it to the attic. Initially I switched to Microsoft Azure since I had a bunch of free credit for it, but I later decided to switch to Digital Ocean since they offered better control and faster speeds compared to what I had with Azure. 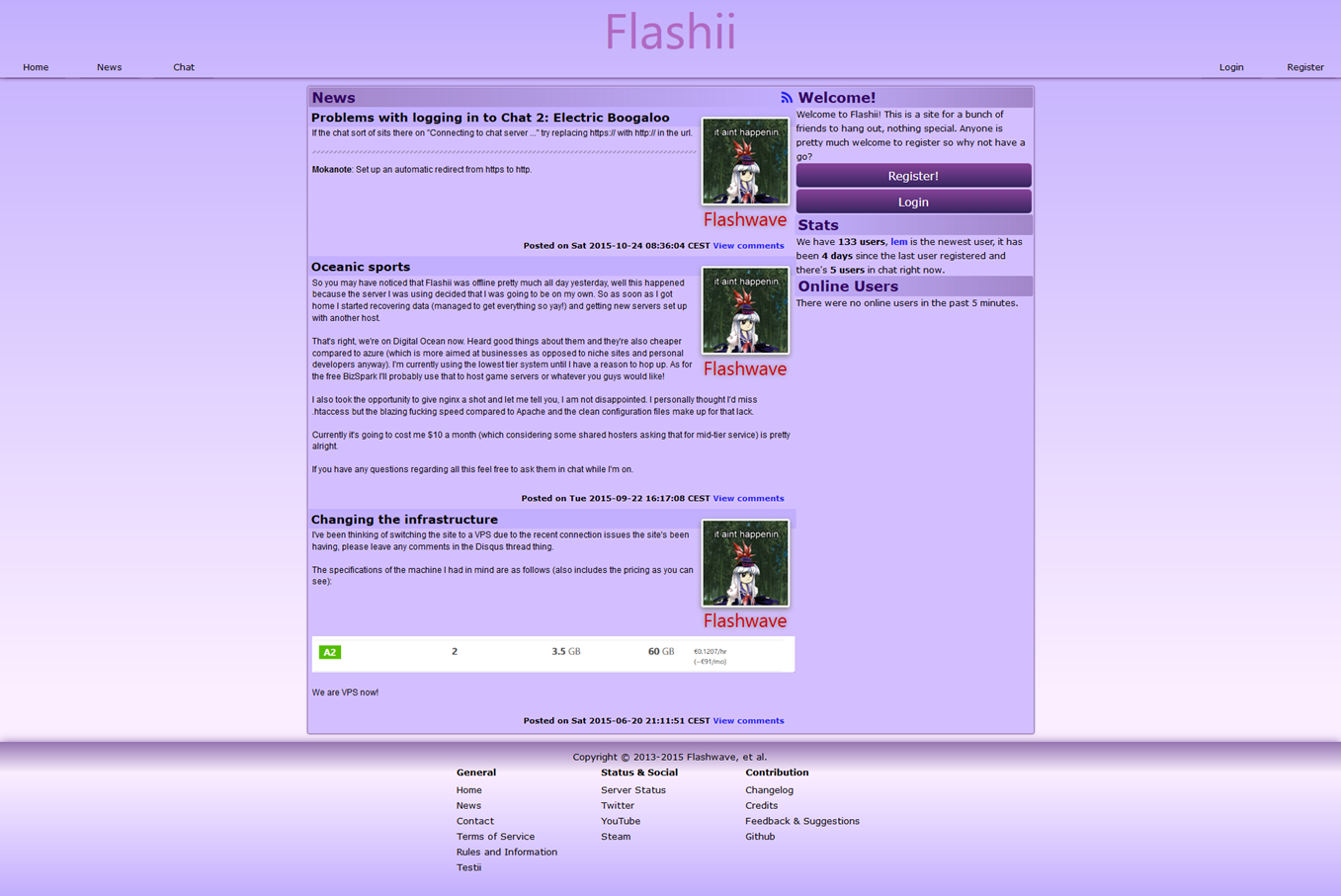 The first major software update to the site since May 2015! This update introduced the first (custom) forum, a number of design changes and better profiles. 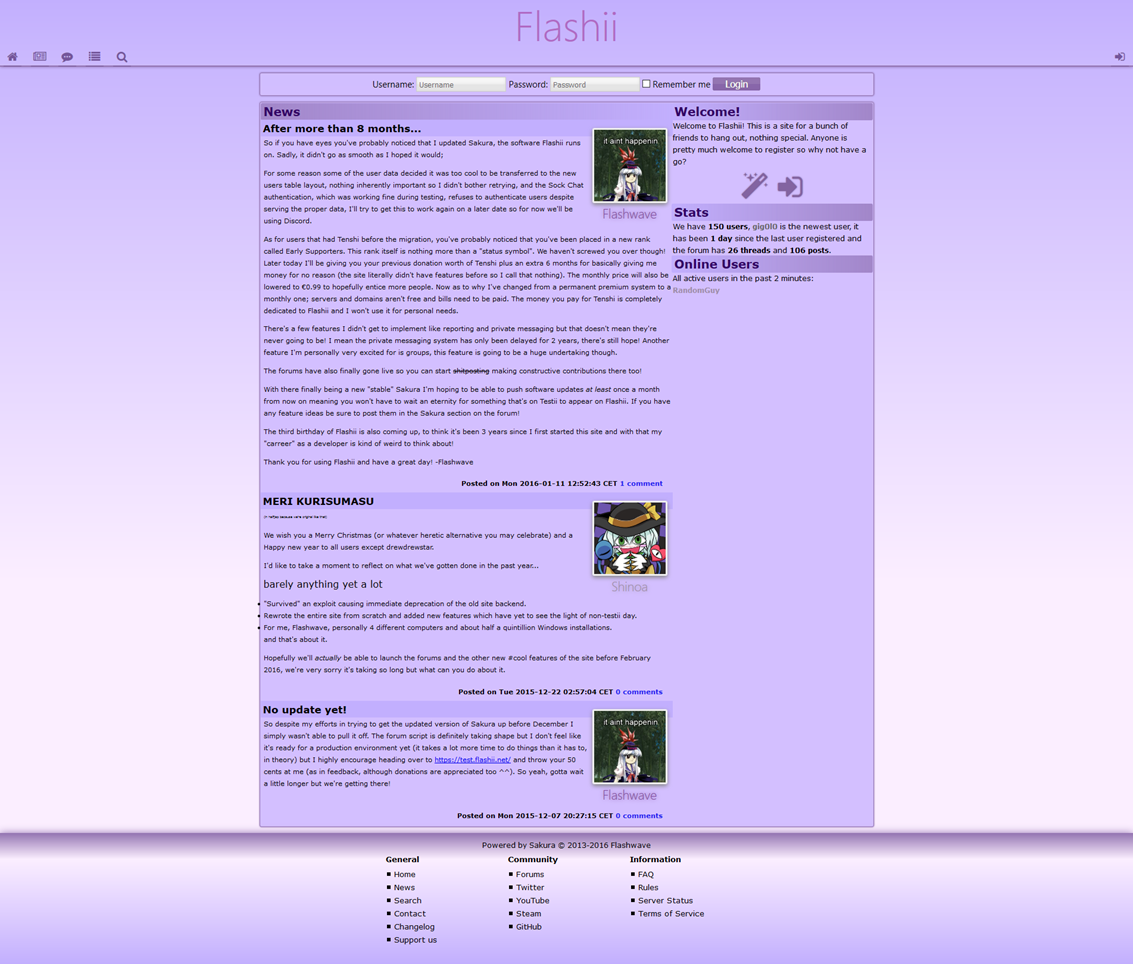 Spookii.net returns! There seems to be an interval year where I have it one year, but then not the next, but I plan to break that trend this year by having it twice in a row. A funny thing to note is that after 10 months of usage, the forum back then had about as many posts as the current forum has gotten in the last month, and I’m extremely grateful for that! 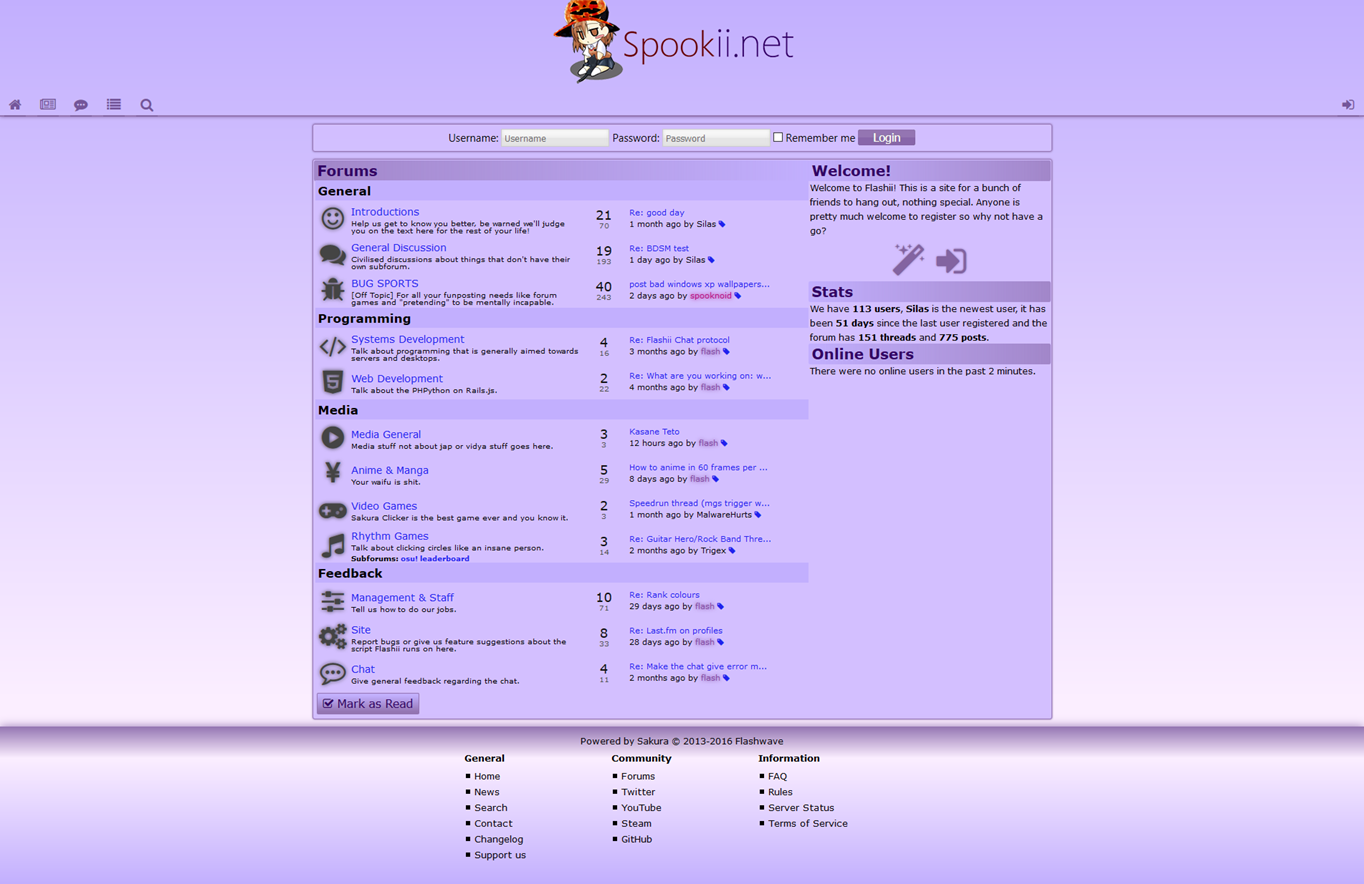 During 2017 the site was pretty much dead, due to several things. At the end of it in December I decided to reboot it and began work on the current backend. You’ll notice that this is a very different design from what we’re seeing today. I began work on this redesign way back in 2015, I’ll include some of the concept images at the end of this document. But I canned this design because it was hard to work with, and the pixel grid started to look horrible at certain resolutions and with display scaling. 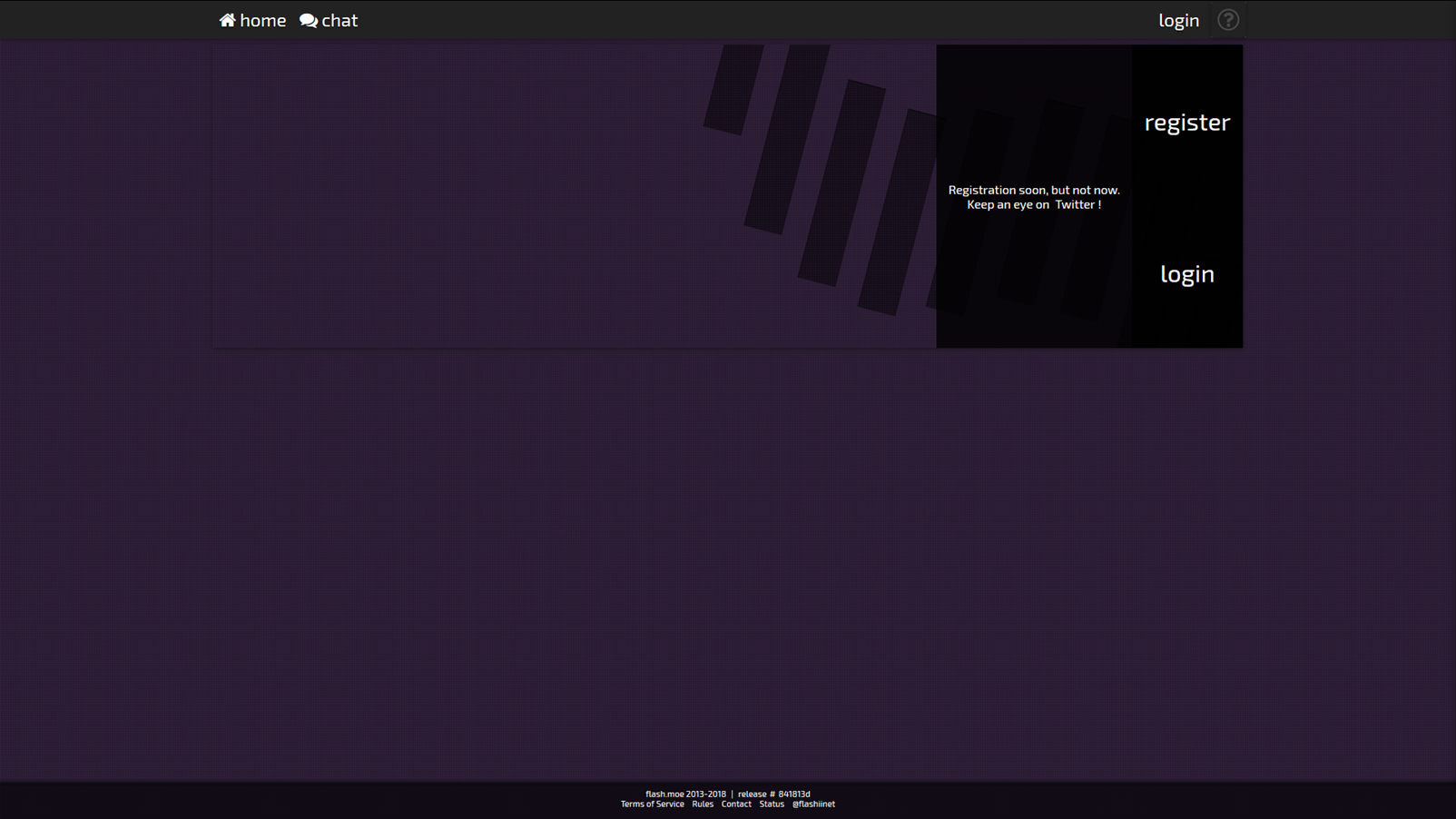 After canning the “new” design I went back to something inspired by the 2014 design, since that era was the feel I wanted to go for again with this iteration of the site. Believe it or not this design grew to become what the site looks like now with a little bit of growing pains, you might’ve noticed it if you intermittently checked the site in 2018.

And with that we’ve arrived at the current iteration of the site and that pretty much ends this trip down memory-lane. I hope you guys enjoy using the site as much as I enjoy making it and let’s go for many more years, without interruption this time! But not entirely, since I still have those concept images to add! 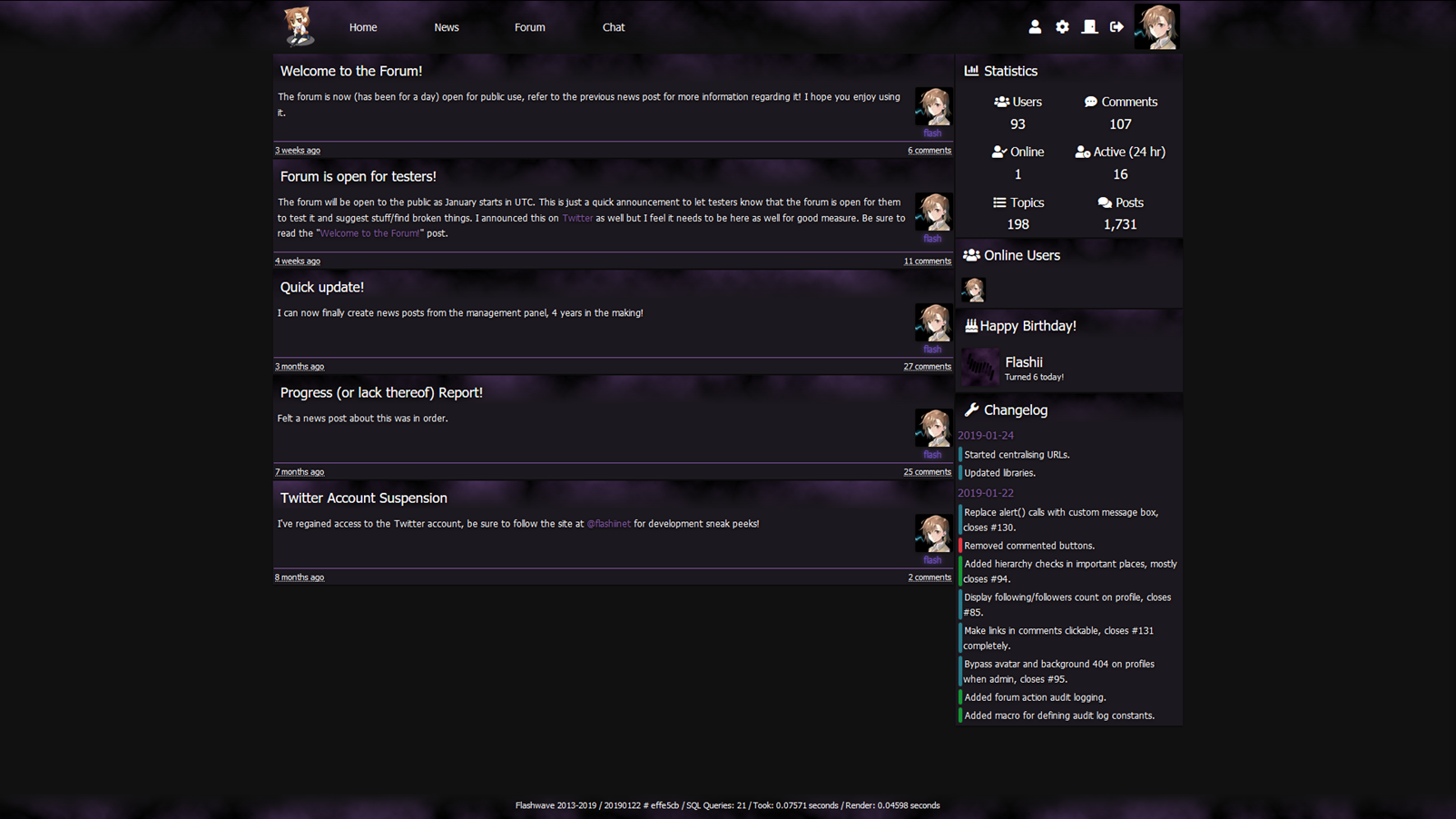 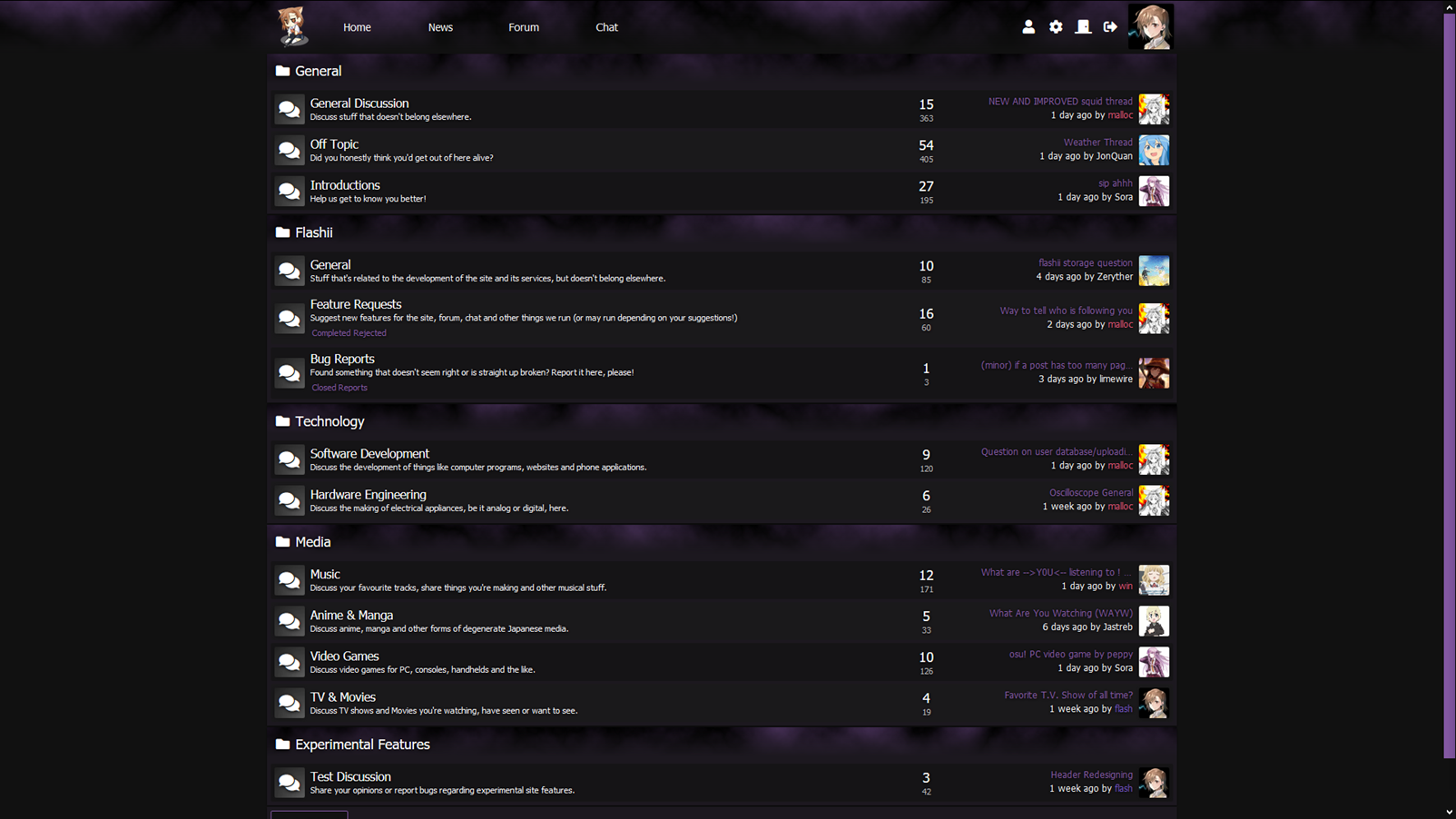 This was my first attempt at redesigning the site after the switch to the new backend in 2014, this was made in Photoshop and was never actually implemented. 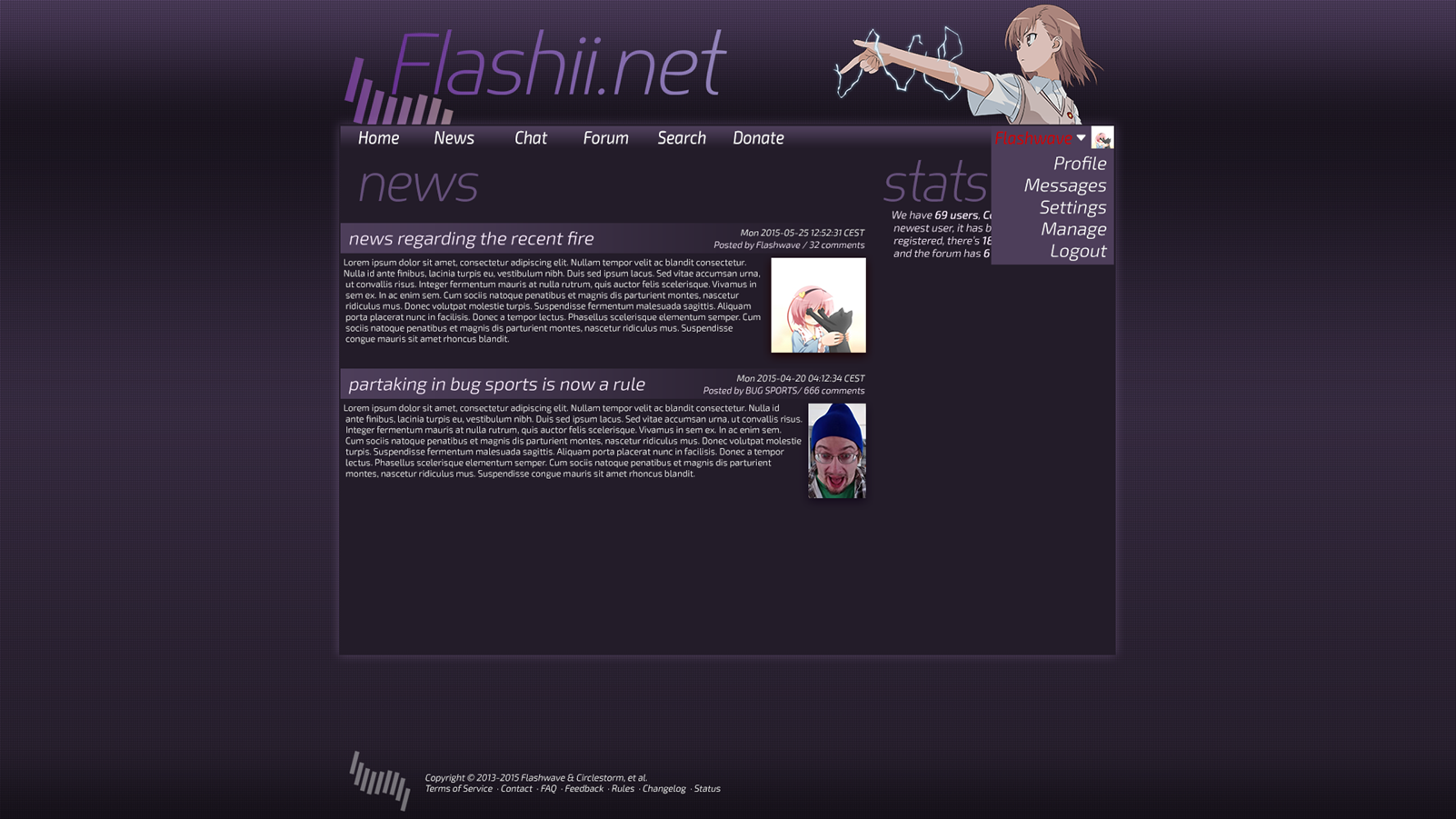 I made this pretty much in tandem with the previous one, fairly certain they even shared the same Photoshop file. 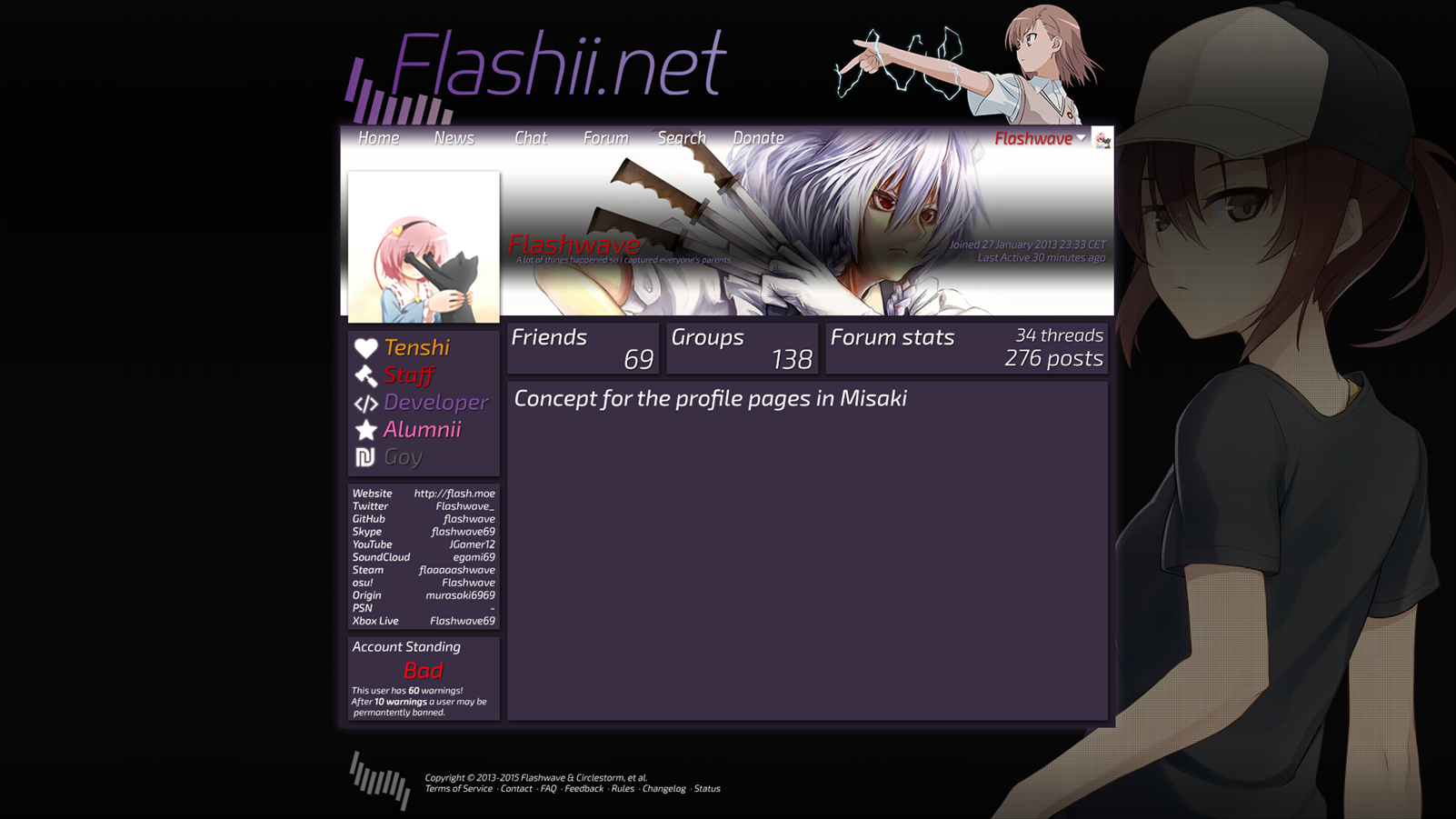 I think I drew this in notebook during a history class, features my horrible quick handwriting.

I’m pretty sure this one was actually implemented at one point. You’ll probably notice the similarities between this and the very early 2018 design, that’s because they’re the same ones.

Pretty much a direct continuation from the previous concept.

win
dows Server 2003 R2
842 posts
joined 6 years ago
1 year ago #1774
you forgot to show the redesigned shock cat interface that looked really neat (even if it was bsod-heavy)
Dying of boredom, I'll try it all...

Sora
formerly former gamestop employee
754 posts
joined 1 year ago
1 year ago #1816
This was really interesting to see how much time was put into this site. Some dedication right here!

i guess the average age going from 13 to 19 really helped out a lot in that regard...
Dying of boredom, I'll try it all...
1 2
Forums Flashii General