I'd like to see it if that's the case.

Deleted User
1 year ago #10596
not yet unfortunately but i did give it some thought last fall, i have a lot of worn out clothes i keep to patch newer clothes that would work great for a scarecrow as well as plenty of burlap and straw 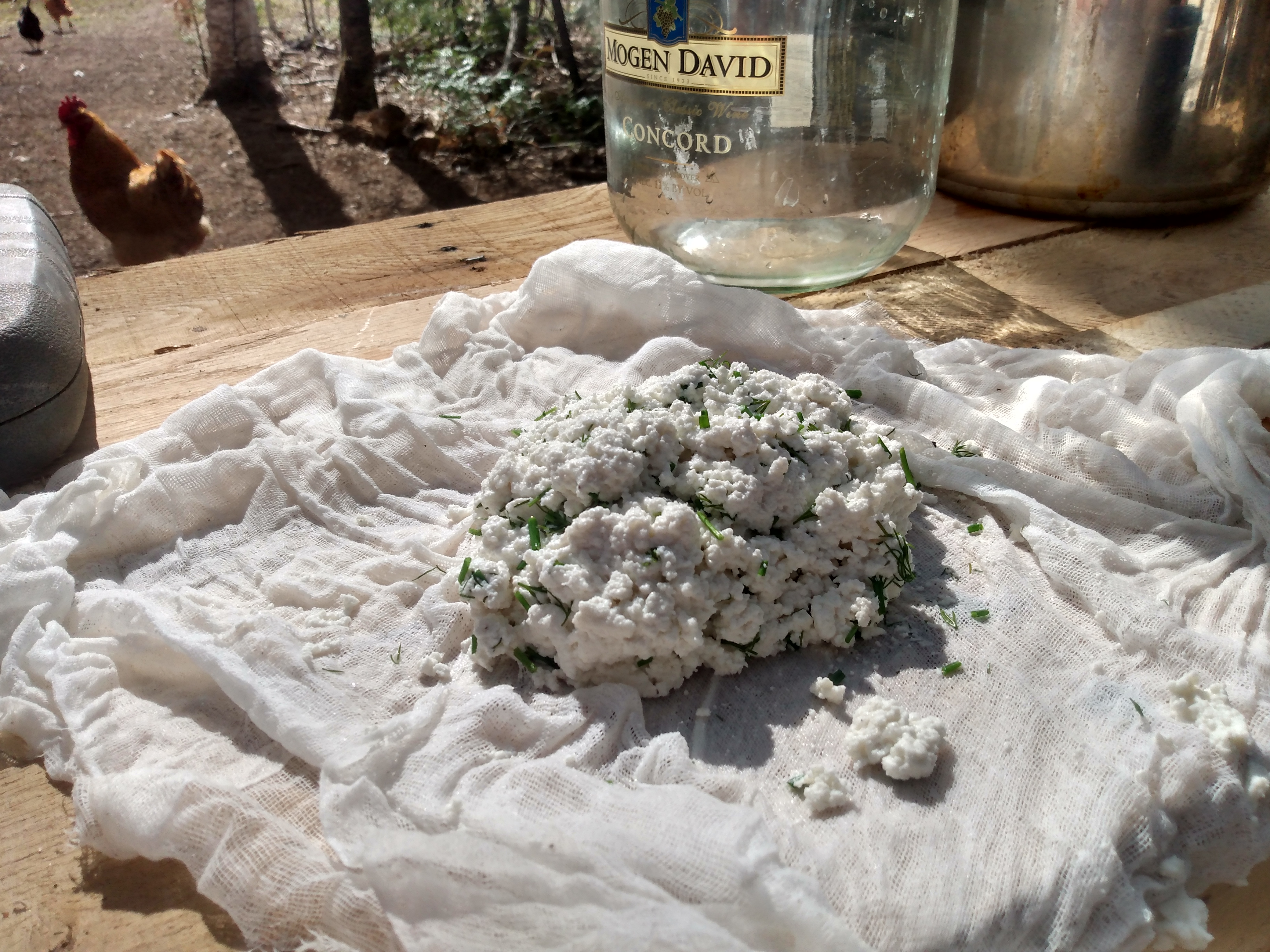 working on making cheese from goat's milk, so far it's going well. there isn't much of a demand for the milk itself although i do think it tastes good and i drink it often, however i think i might be able to create demand for the cheese if i can perfect several recipes and aging techniques

from one of our goats we get about a gallon of milk a day, the curds you see here are from only a half gallon. additionally we have another goat giving milk that's weaning her kids off so we might have access to up to two gallons a day, so making and aging cheese could be a really clever way to market a product that could get better with age which in turn means forecasting demand at the market is less important, since any leftover abundance of product could just be aged and sold again later
Deleted User
1 year ago #10598

let the curds hang in the cloth for a while and it turned out pretty decent. tastes good and spreads well but i definitely need to get a distinctive recipe down so it stands out
Deleted User
1 year ago (edited 1 year ago) #10860
I am well aware that the forum is dead, that no one bothers to read anything here let alone this thread, and my words are wasted. Nevertheless, I will write this under the inspiration of that which I have seen for even those few that read this to consider, though I know they are too cowardly to respond in a way that may cause a discussion to start.

In my meditations and actions I have fully realized the practical reasons that the mind of all mankind is at its best to respond and react to suffering, and further that the lack thereof breeds illness of the mind, of the body, and wickedness to all it presses upon.

The body, when satisfied, does not act. A spirit of pleasure or even of wise contentment in itself invokes an arrogance in the assumption that you have solved the mysteries of life and there is nothing left to learn. This holds true whether you have much or little knowledge of the world and the wisdom acquired therein, the fool with a full belly and the gratification of the flesh despite bringing forth nothing feels just as content as the wise man who has set out and laboured much in his endeavors to create something of worth, basking in the fruit of his labour.

Therefore, it is important more now than ever to question yourself, your contentment and pleasures, and what you know. If you have done little, why do you stay there? If you have done much, why do you rest on your laurels? The same fate befalls both men as a consequence of their arrogance. They are both destroyed.

Do not rest in your pleasures. Do not rest in your works. Even if you work to the point of exhaustion there is more to do, more to learn, more to realize. This said, do not let such a thing destroy earned mirth but rather temper your mirth with the knowledge that completeness is equally far from the wise man as it is from the fool. Further, do not let such a thing trouble you in your works as a stumbling block, as the fool would readily use such a thing as an excuse for idleness.

Reverence suffering and contemplate it, draw everything you can from it. Allow the scant pleasures of life to soothe your weary soul when you work, but do not let them season your actions or, God forbid, your perspective.

Sora
formerly former gamestop employee
964 posts
joined 3 years ago
1 year ago #10861
Very interesting that your bring this thought up, since I have contemplated the idea of complacency when it comes to learning and striving to complete tasks I set my mind to. This idea hits me especially when I am at work, the first six months working were relatively easy and I had no issues whatsoever. I thought if I did anything harder it would be applying the exact same ideas I have learned to something bigger and somewhat more complicated. I became arrogant and actually did complete harder tasks when thrown my way, but I could not fathom how things could turn south when letting your guard down. Very recently, everything I did was a failure, nothing was going well and I ended up redoing things multiple times. I feel there is no greater pain than repeating something and still failing over and over again. I can attest that letting yourself get too comfortable is very naive and leads to more suffering. I rather always be suffering to a degree rather than suffer catastrophically and lose all motivation.

The true extent to which modern life seeks to isolate people really is a scary thing to behold. Not only is the power of the individual used as a means of leading people away from realizing their true power as a group, but I think there is also a lot of mechanisms by which people are pitted against each other as a means of actively disrupting people's ability to work together. After all, if people are fighting amongst themselves, or develop such a low opinion of others that they cannot believe in the power of organizing as a community, no push for change and improving the world can be made.

This is especially prevalent online, as a lot of social media and news sources have a financial incentive to spark controversy and bias their content towards negativity, since it typically results in more engagement with their platform and more eyes on them as a whole, but the offline world is not without its own means of demotivating people as well. In particular I think about the real stress that can be caused by work, by school, by finances or social expectations and the like, which often manifests in one's interactions with other people. Patience and understanding begin to erode and in public that can lead to all sorts of bad behavior which can really eat away one's faith in others after a while, and keep them a lot more closed off in their relationships as well as just life in general. While I do not wish to discount the very real population of truly horrible people out there, I feel as if they are over-represented in daily life.

And that's where I think your suggestions towards putting the work in to find decent people, getting involved in communities that can offer support and are just something you're engaged in really helps. You're no longer just seeing people through the lens of their bad moments, where they're stressed out and frustrated and just want to go home or whatever, you can also see what people are like when they're involved in something they truly enjoy and believe in. Not to mention how involvement like this can also really help to improve yourself in a lot of ways, outside perspective and support can really mean a lot.

That's my two cents anyways, hopefully whatever point got lost in my rambling can still be found.